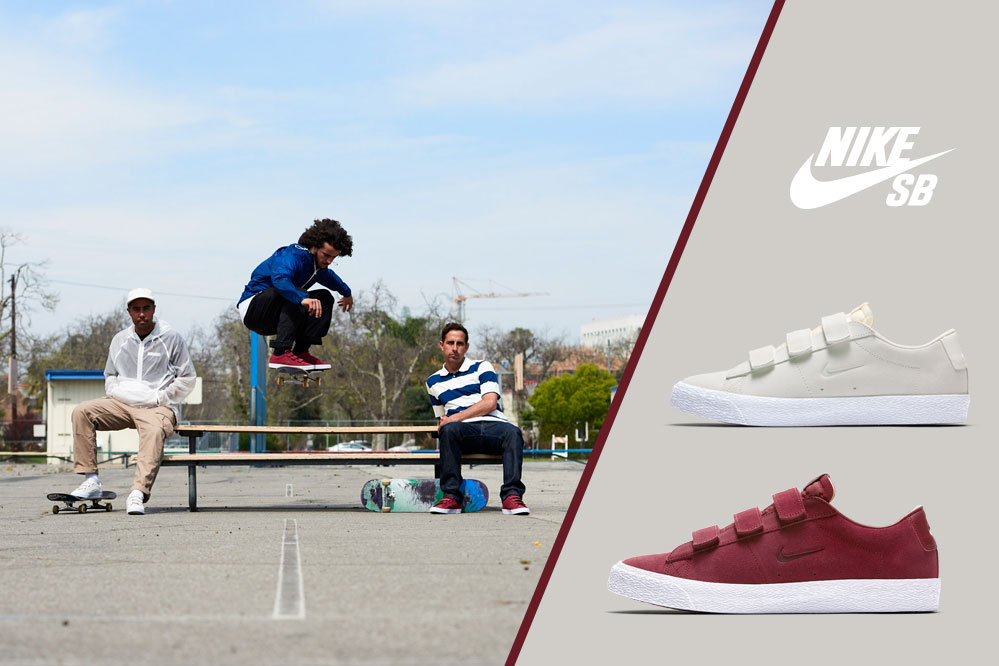 The Nike SB x Numbers Collection – A brief glance at the 90s!

Numbers may be a new brand, but it had fame from the start. Nike SB is now again joining forces with Eric Koston and Guy Mariano to introduce two new Blazer Low AC models along with a small streetwear collection that is clearly inspired by the 90s.

The highlight of this collection is, of course, the two Nike SB Blazer Low AC models. These exceptional Nike SB x Numbers Collab shoes are only available in selected shops and, of course, at skatedeluxe. Although the velcro is the main feature here, the preppy look has not only aesthetic reasons. The system gives you a very good fit in the shoe and torn shoelaces are a thing of the past. In addition, however, the simplicity and the clean design are the reason that these two models, with a luxurious suede upper in bright white and deep burgundy, are a must-have!

But as skateboarders, Koston and Mariano were not just in for the look, but also for the skate performance of the Blazer Low AC. To ensure this, the shoe has a continuous zoom air cushioning for optimum impact protection, as well as a flexible rubber outsole with a herringbone pattern, which gives you enough grip. But there’s even more on the details. On the inside of the Velcro fasteners, you will find nice detail stitches, which show the lettering “Numbers Edition” as well as the year of the founding of the brand. Nike SB is represented on the outside of the shoe with an embossed swoosh and the Nike SB lettering on the heels. The printed insole offers a hidden reference to the Collab.

The Nike SB x Numbers collection – the best of the 90s!

Stripes, polos and velcro – those who drop these three terms in the presence of Numbers founders evoke nostalgic feelings. According to Mariano and Koston, this is precisely the style the two have worn and celebrated in the 1990s. The fact that this look is now reborn with the exclusive Nike SB x Numbers collection seems to make them both more than happy. The Nike SB x Numbers Collab Streetwear line is based on just two polo shirts and two lightweight jackets, which will be released in the coming weeks.

But less is sometimes more because the two parts score with style and subtleness. A look that has already shaped the era of the Brooklyn Banks, 90s hip hop and the emerging skate culture during this time. Now there is the revival in form of the Nike SB x Numbers Dry Men’s Polo in a blue-striped and a red-striped colourway as well as with the light Nike SB x Numbers Raglan Sleeve Men’s jackets in blue and white. Or briefly Koston’s own words: “This collection is right in line with what we were wearing in the early ’90s!”