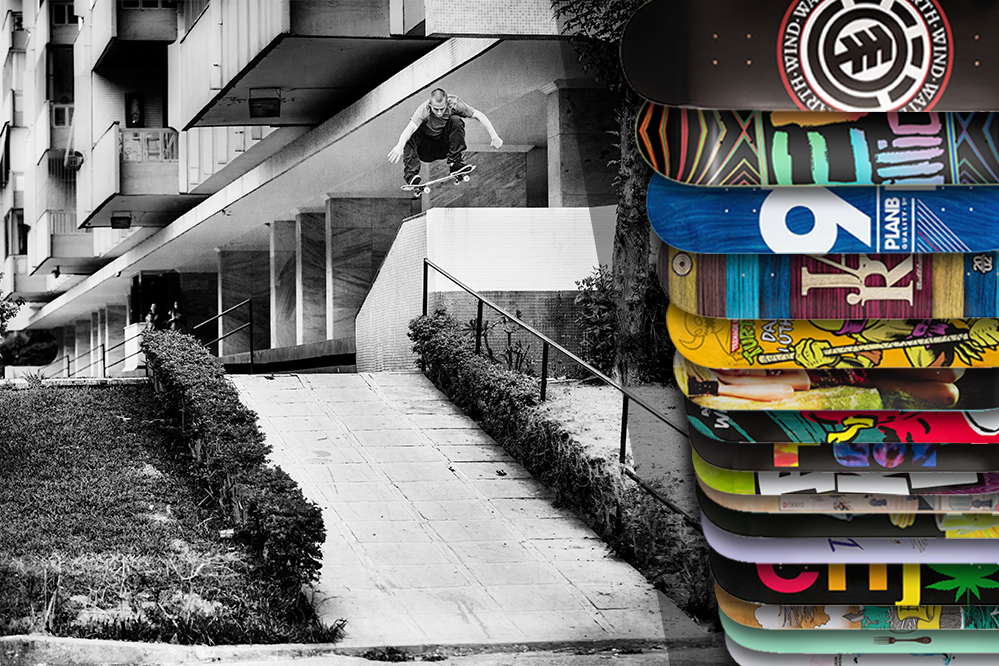 When it comes to Skateboarding, 2016 definitely had a lot to offer. Just before the turn of the year, it’s time to introduce to you this year’s top brands for skateboard decks.

One thing can already be told – compared to 2015 a lot has changed! The selection of the ‘Brands of the Year’ is made up of the combination of sold decks, brand shop visits, search queries and your interest in blog entries regarding the top players in the business. Our own brand skatedeluxe was not considered for the ranking. We are happy, however, that you love to skate our in-house boards diligently and the skatedeluxe deck series is celebrated well. In this sense, a big thank you to you all! Let’s start with the 16 most popular skateboard deck brands of 2016! 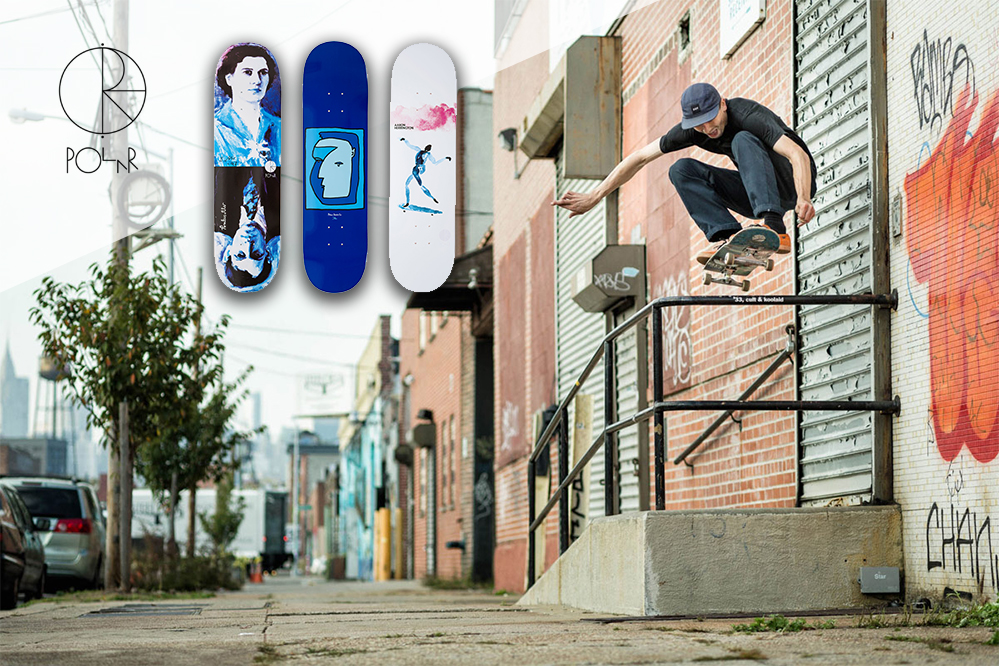 #16: Polar Skateboards
Art and creativity – The fact that these two aspects have a high priority for Pontus Alv can be seen on every deck of the Swedish brand. If you are looking for a more philosophical approach to skateboarding or just want to look at unusual graphics, this is your brand. Polar boards are available at skatedeluxe from 59.99 € | 50.00 GBP! 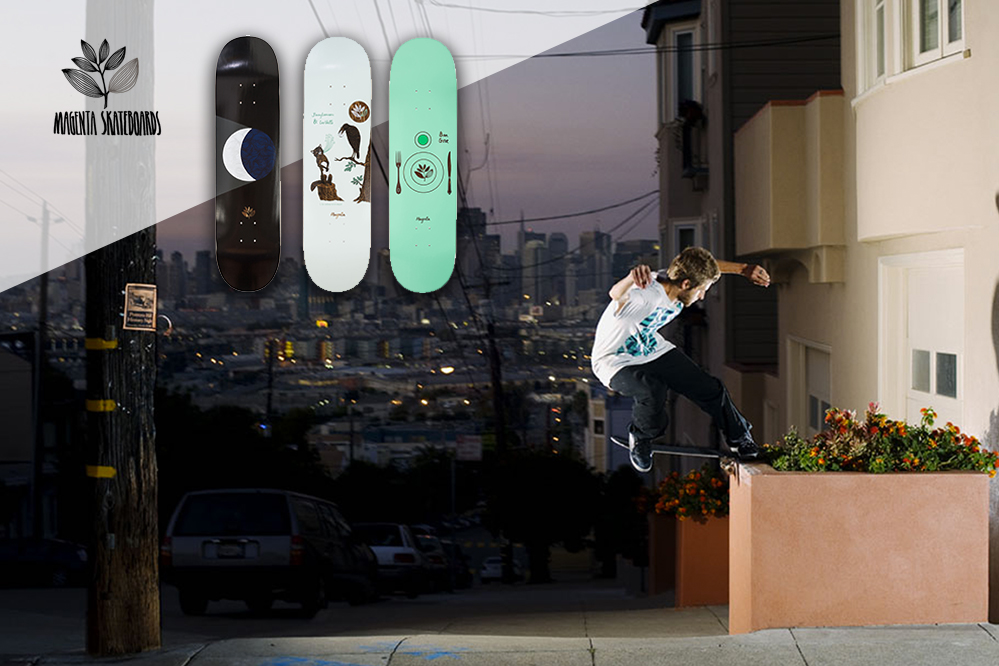 #15: Magenta Skateboards
Magenta Skateboards definitely earned their entry into the Top 16. The French brand is characterized by a clear, artistic and fashionable approach. Outstanding graphics and lots of love are elementary for Magenta. The haute couture for skating can be bought from 59.99 € | 50.00 GBP! 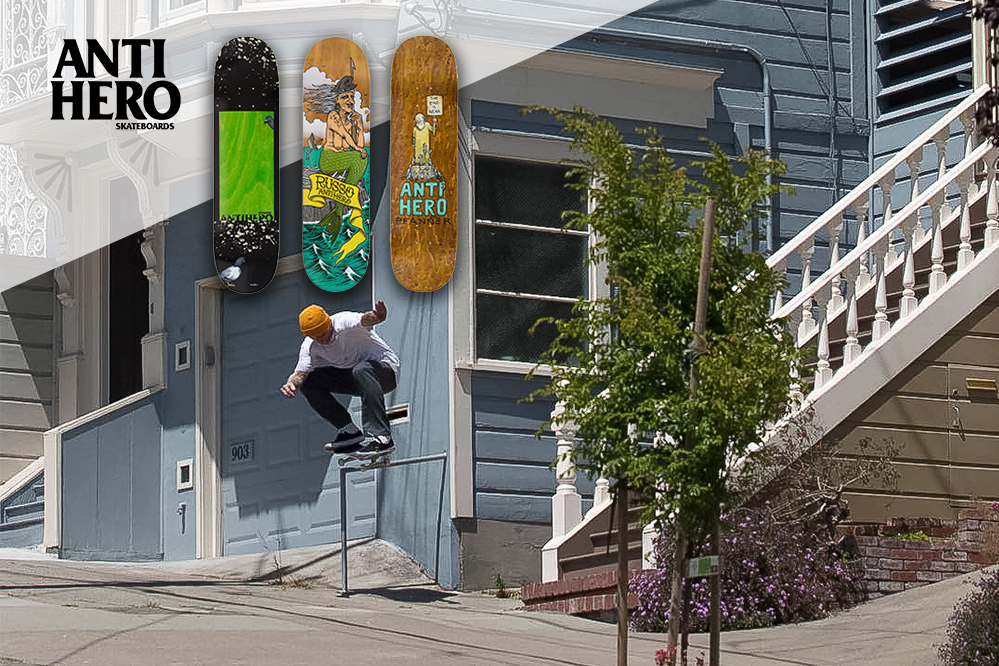 #14: Anti Hero Skateboards
New in the top 16 ranking, but still an old stager in the business. In 2016 you gladly put Anti Hero decks under your feet, which is not surprising regarding the neat designs and the high quality of the boards. The brand stands for 100% skateboarding without high life and frills. It’s all about ripping it. Get your Anti Hero deck at skatedeluxe from 52.99 € | 45.00 GBP! 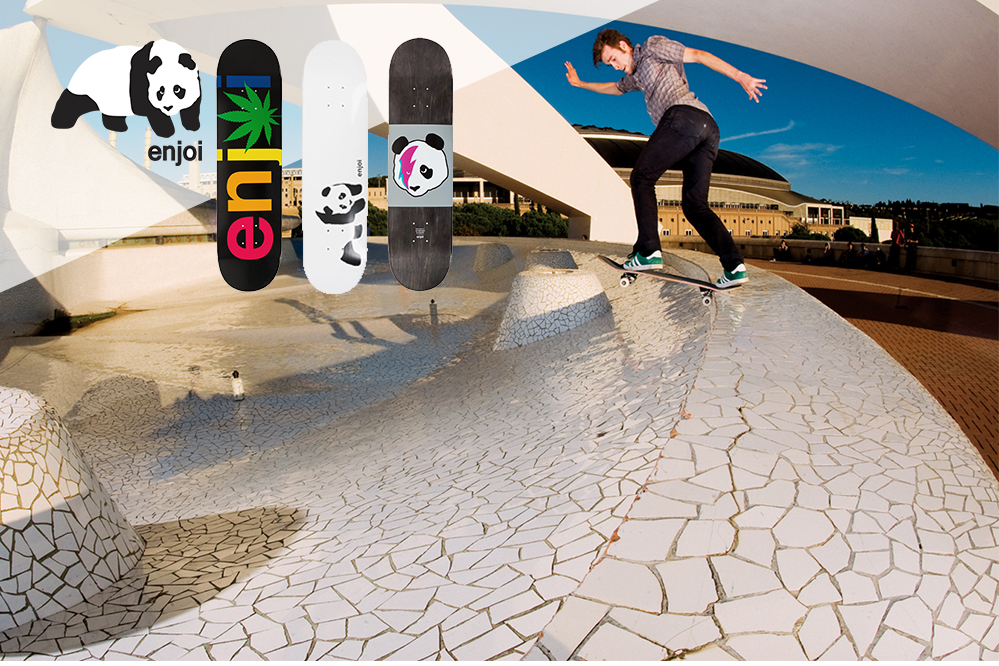 #13: Enjoi Skateboards
A small step back does not stop a panda. Even if Enjoi loses four places in 2016, the Californian brand with the Asian mascot can not be excluded from the top lists. And who knows, Enjoi will probably take it with humor. As a Panda, you sometimes have to slow down. Your Enjoi Deck is available from 59.99 € | 50.00 GBP! 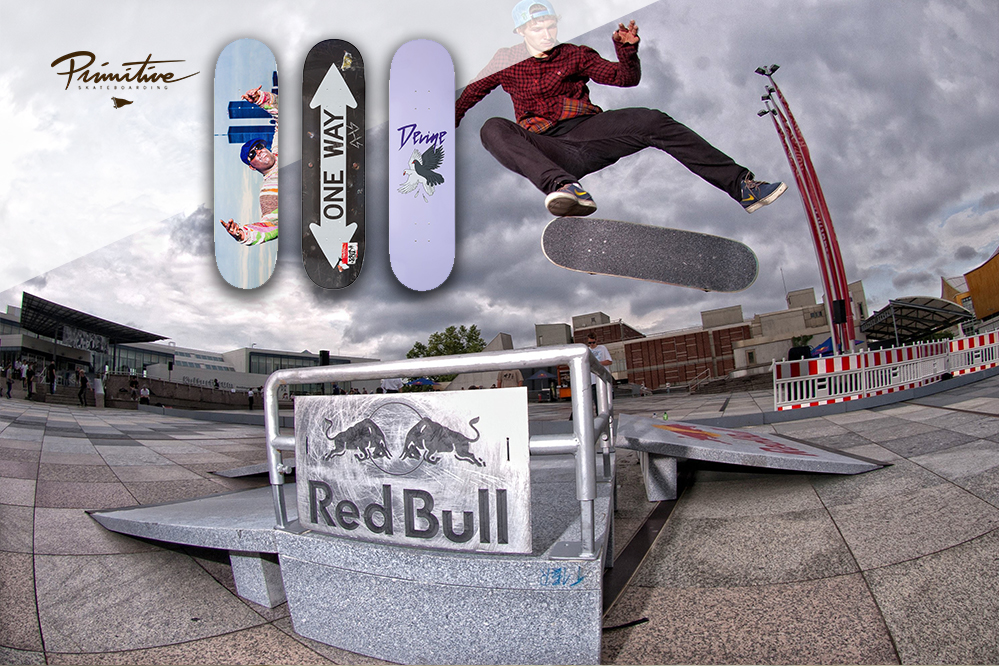 #12: Primitive
Even if the Rodriguez ‘One Way’ deck from Primitive suggests otherwise, there is only one direction for P-Rod: up! This is not only proved by the rocket launch of his brand into the top 16 at skatedeluxe but also by himself while being on board. Besides, neat graphics, high-quality materials and the perfect concave should convince you as well. Your new primitive deck costs 74.99 € | 60.00 GBP! 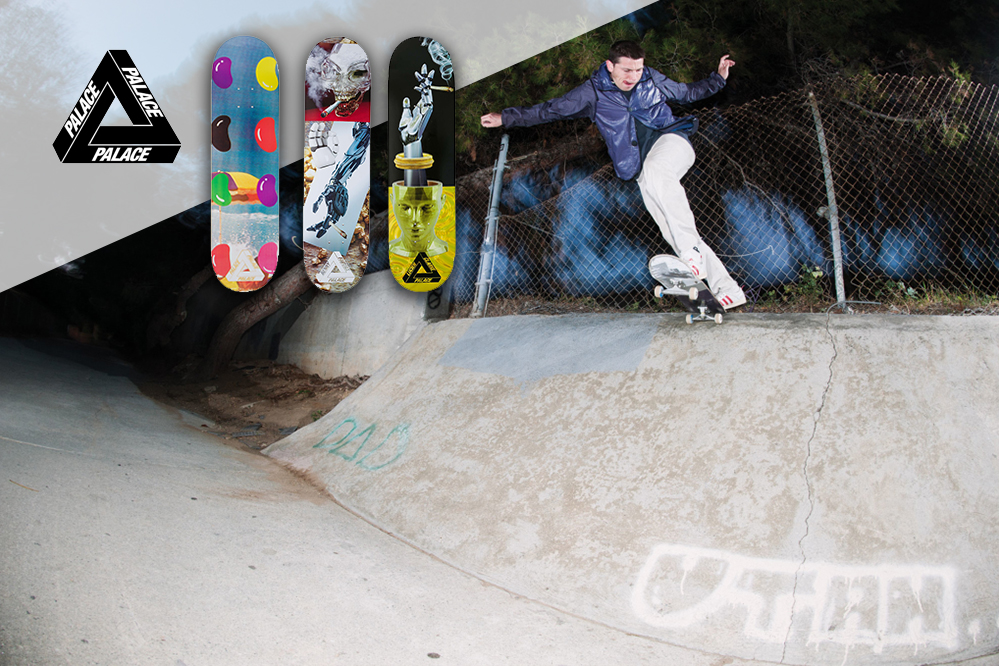 #11: Palace
It can be a bit obscure when Fergus Purcell and Will Bankhead design new Palace decks. The fact that the boys meet the Zeitgeist is proved by the step-up of the London brand by three places compared to last year. Nevertheless, these decks belong on the street. Just ask Benny Fairfax, Lucien Clarke, Danny Brady and Co. – Palace Decks are offered from 59,99 € | 50.00 GBP! 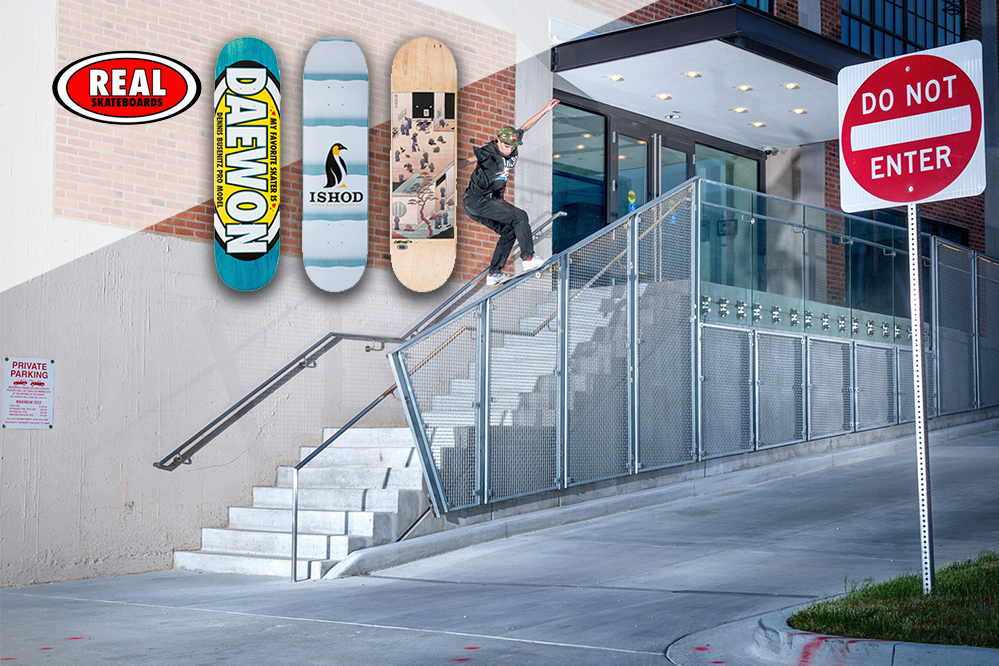 #10: Real
Dennis Busenitz, Ishod Wair, Kyle Walker – Real simply has to be in the top 10! Even if they lose four places in the ranking, they have a SOTY winner more on the team. What does this say about the quality? These decks are simply “The Real Deal”. Your new Real deck is available at skatedeluxe from 59.99 € | 50.00 GBP! 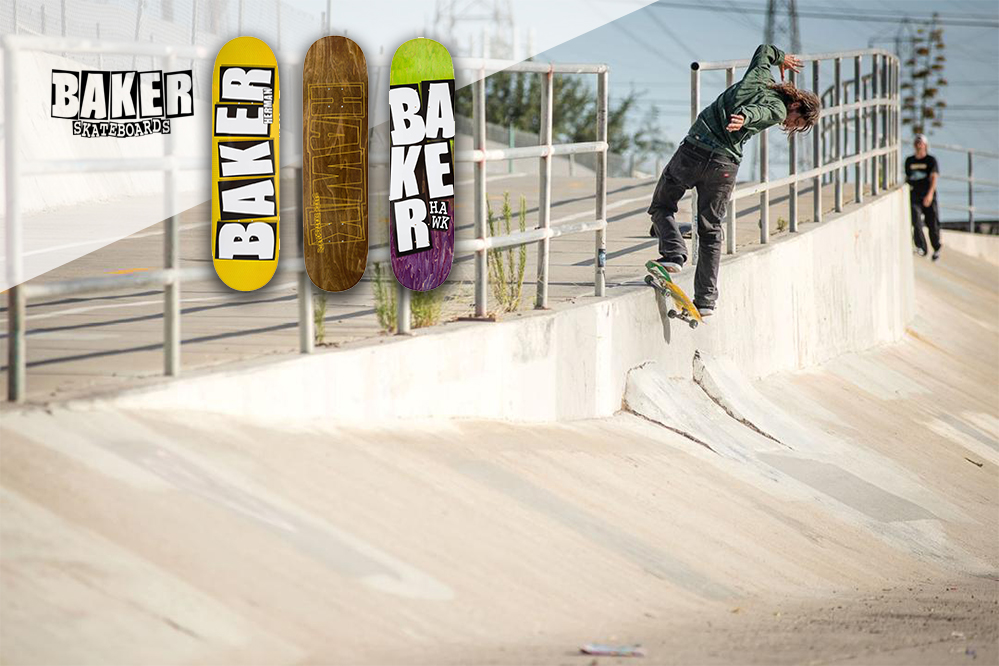 #09: Baker
Brutal, mean, Baker! When it comes to street skateboarding, there is hardly a brand that rips harder on the street. It does not bother them to fall a place behind. Andrew “The Boss” Reynolds and Co. are going to pick it up again next year. The solid planks can be bought from 69.99 € | 60.00 GBP! 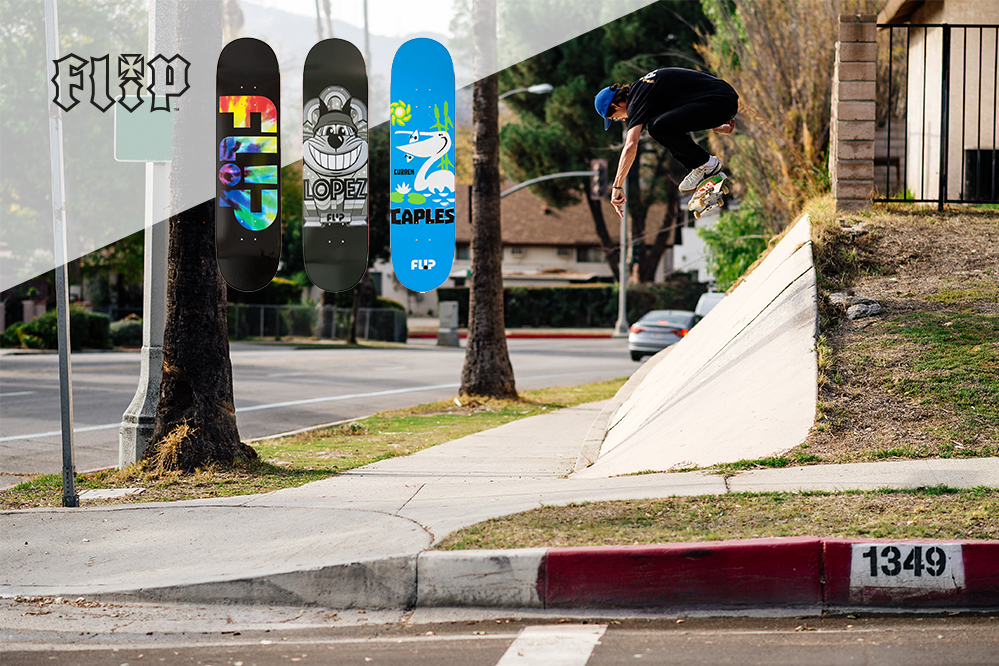 #08: Flip
The Californian brand has performed nothing less than a triple flip and catapulted itself from #11 exactly into the centre to #8. This isn’t only nice for us, but also for skatedeluxe team rider Denny Pham, who literally stands on Flip. How hard you can skate these decks is also shown by his team colleagues Arto Saari, Louie Lopez, Curren Caples and Co. Price: from 64.99 € | 55.00 GBP! 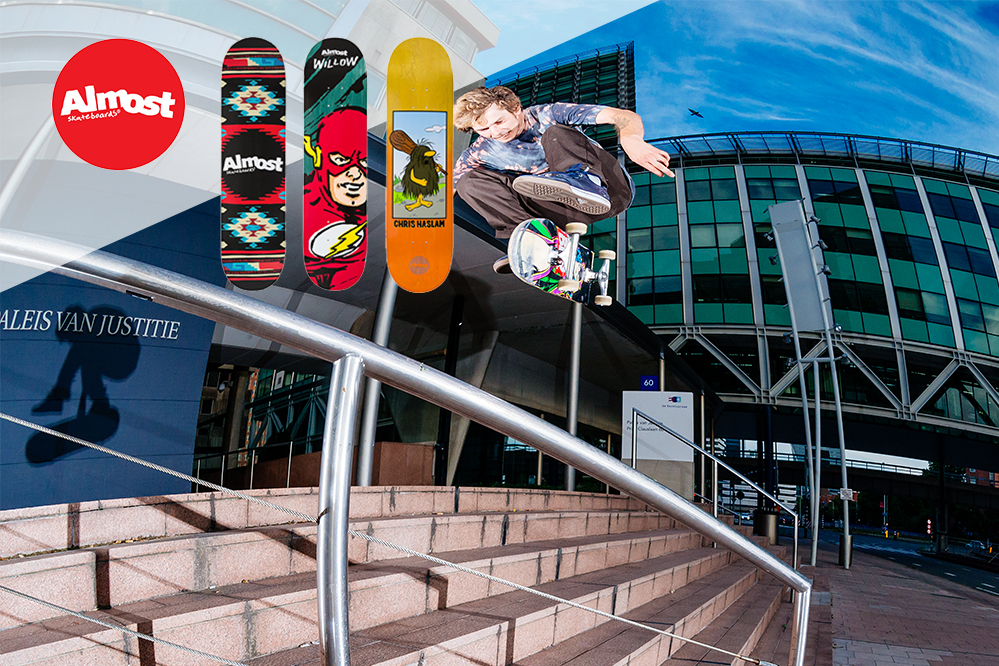 #07: Almost
Hanna-Barbera, DC Comics and Todd Francis – at Almost, childhood dreams come true. But on the top sheet, however, is no place for childishness: Willow, Haslam, Song, Mullen and Co. are ripping it on these decks and can hardly be surpassed in ability. To provide the needed strength for the guys Almost has invented the innovative Impact Technology. The two lost places are a minor matter because Almost makes their own thing anyway. Up to 8 layers are available from 62.99 € | 55.00 GBP! 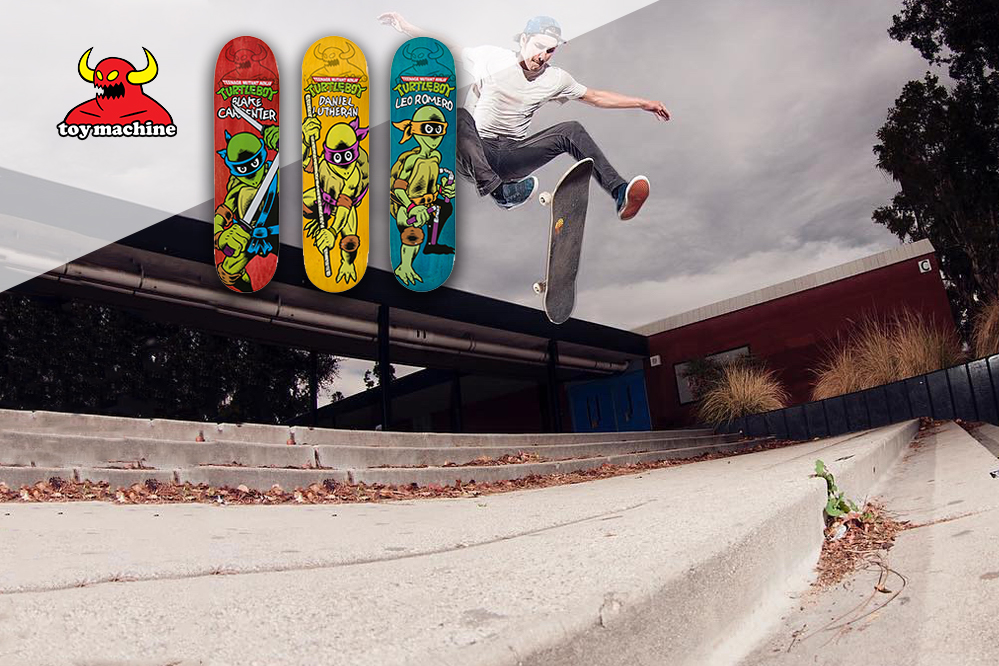 #06: Toy Machine
You seem to love Toy Machine deep in your heart! Ed Tempelton’s brand did well this year and landed four places above last year’s ranking. In addition to many other exhilarating designs, the Turtles deck series was the most acclaimed one. The quality is proven by team riders such as Leo Romero, Collin Provost, Daniel Lutheran and Co. You can get your Toy Machine deck from 59.99 € | 50.00 GBP! 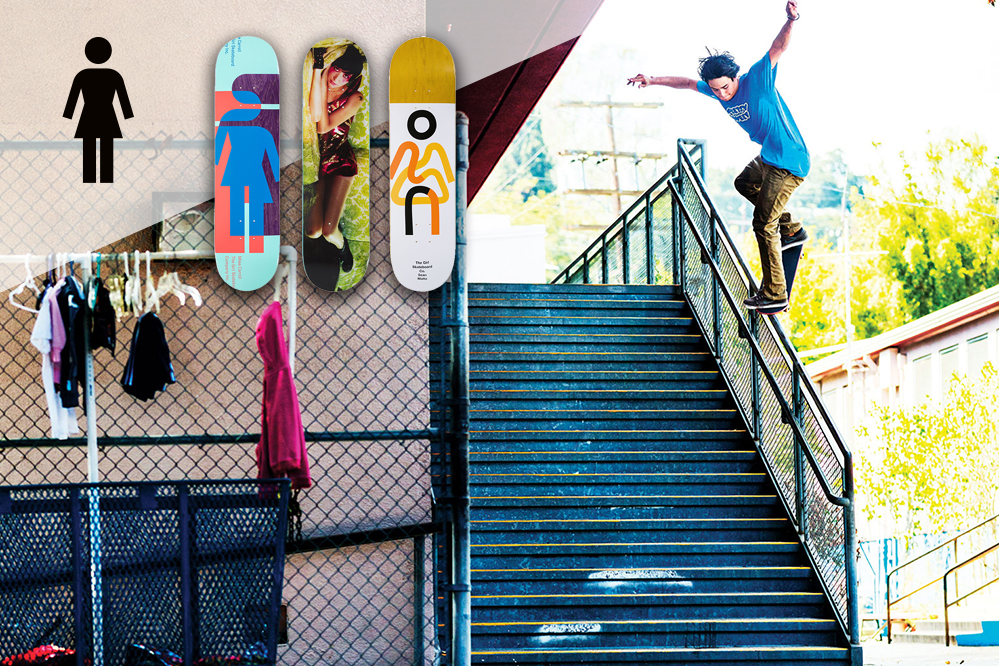 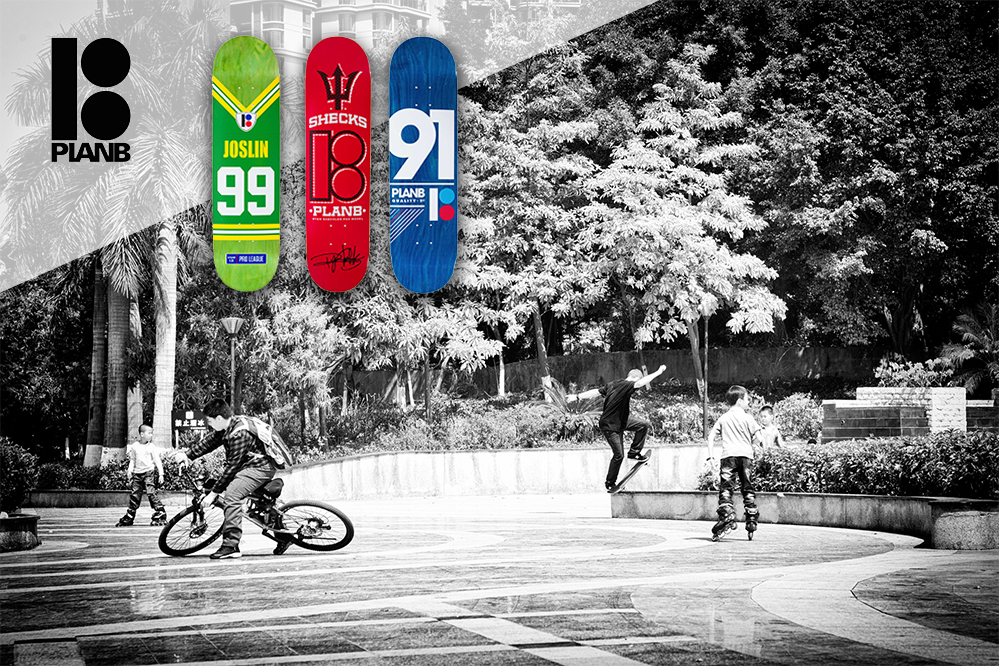 #04: Plan B
Although, Plan B has missed the top 3 once again, it’s positioned solidly on #4! Plan B decks do not only please you well, Trevor McClung, Torey Pudwill and Ryan Sheckler swear on the decks by the Californian brand as well. This year’s collabs with Etnies and Bones were a game changer, too. Get your Plan B deck from 59.99 € | 50.00 GBP! 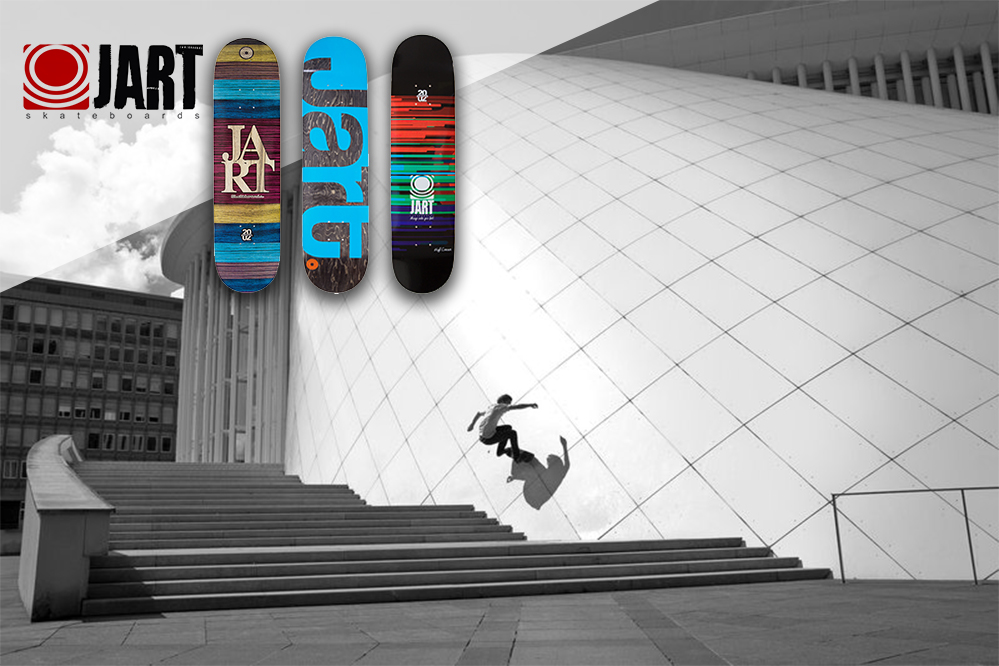 #03: Jart
¡Olé! The Spaniards of Jart have repeatedly landed in the top 3, thus cement their firm position in the European skate scene. The decks are still produced in their sunny home country and convince in addition to the nice graphics mainly due to high quality at a fair price. Your new Jart deck is available at skatedeluxe from 44.99 € | 40.00 GBP! 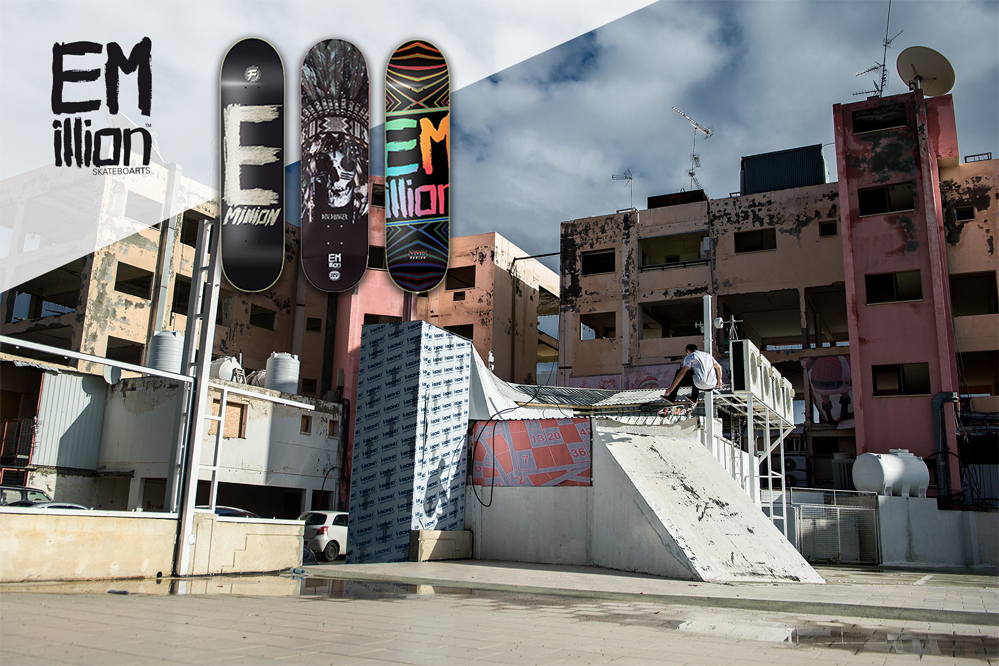 #02: EMillion Skateboards
No longer number one but still quite close: EMillion SkateboArts land on the second place this year, which is more than respectable regarding the competition. The Bavarian brand stands for quality, artistic designs and a motivated team, which is also represented by skatedeluxe team rider Ben Dillinger. EMillion decks are available from 49.99 € | 40.00 GBP! 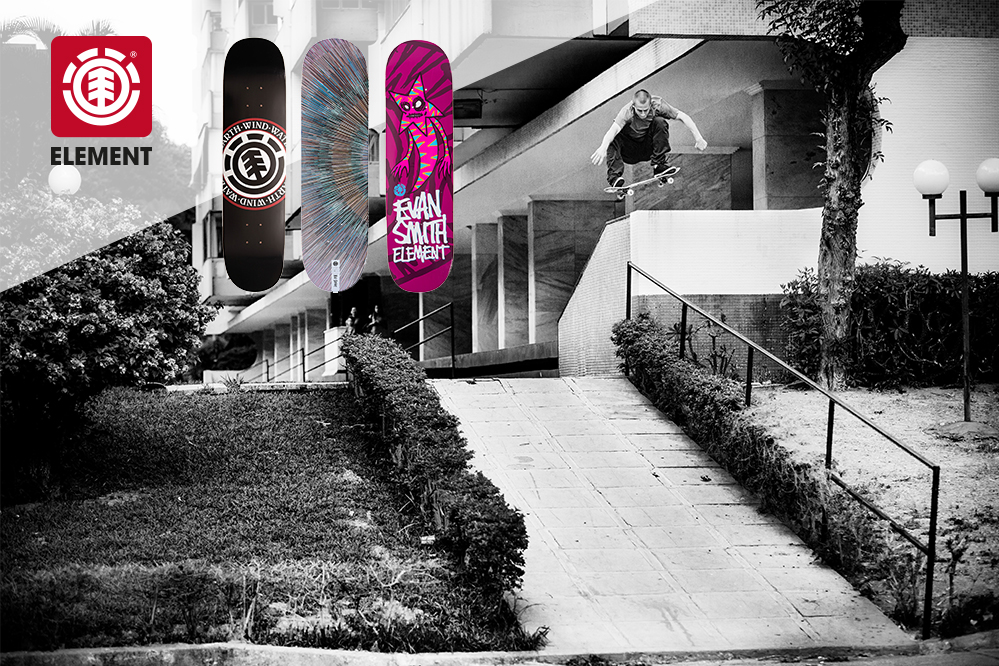 #01: Element
Last year, Element didn’t even make it to the top 3, but in 2016 it reached the top and therefore is our top skateboard deck brand on skatedeluxe! We can only congratulate! Even after 24 years the old hand of the skateboarding industry, which was founded in 1992, does not forget how to provide you with decks that push tears of joy out of your feet. What to expect for 2017? A big anniversary! Can’t wait for that! Get your new Element deck from skatedeluxe starting at 59.99 €| 50.00 GBP!

That’s a lot of wood! But it is by no means the end. In 2016 there were many other brands that have pleased us with wooden works of art. Chocolate were inspired by modern living shown in their Modern Homes series, Welcome beautifully presented decks in original shapes, and the two German brands Inpeddo and Mob showed that seven layers do not necessarily have to come from overseas.

We are already hyped for 2017 and wonder what the skateboard world is up to next. If your favourite brand was not on the list, let us know in the comments below. Until then, have fun with the last days of the old year!