18 total products
Dennis Busenitz and adidas made history together. Each pro model by adidas and Busenitz became a classic in the scene over a short time. adidas Busenitz skate shoes are timeless, classic and perfect for street skating. [read more]
18 items were found
Apply filter

When you think of adidas skate shoes, the name Dennis Busenitz inevitably comes to mind. As the first pro skater for adidas Skateboarding, he was widely responsible for the brand's success in skateboarding. adidas Busenitz models have long been among the most sought-after skate shoes. Of course, you can shop your favorite model of the adidas Busenitz easy online in the skatedeluxe skate shop.

If you grow up in Munich, you're probably influenced by football. It was no different for Dennis Busenitz. For the design of his first signature skate shoe, he took inspiration from the adidas Copa Mundial. The adidas Busenitz, or adidas Busenitz Pro as it is also known, is a flexible shoe with a "low profile" cup sole and a timeless silhouette.

The Busenitz Pro breaks in quickly and is comfortable due to the reinforced heel counter. The long tongue is the signature feature of the adidas Busenitz and can be adjusted as desired. Simply cut along the specified lines with scissors to customize the shoe tongue.

The Busenitz Vintage is considered the somewhat reduced version of the exceptional shoe from adidas Skateboarding. The most striking features are the short and small tongue and the slightly slimmer silhouette. The Busenitz Vintage also makes a great figure off the board. In the adidas online shop of skatedeluxe you can shop a lot of different colorways of the classic.

The adidas Busenitz Vulc - an original with vulcanized sole

As the name suggests, the Busenitz Vulc is an adidas Skateboarding Busenitz with a vulcanized sole. The Vulc version of the adidas skate shoe classic has the potential to be your new favorite shoe.

The profile of the outsole offers more grip than most cup soles and also provides a good boardfeel. Like the original, you get a well-cushioned heel area and a comfortable insole for the necessary support. If your skating includes curbs, ledges, anad technical tricks, we highly recommend the Busenitz Vulc.

The Busenitz Vulc II is the upgraded version of the Busenitz Vulc and offers even more technical refinements. The vulcanized rubber outsole with a Geoflex profile ensures superior flick behavior, and the narrower cut form fits your feet perfectly.

If you want to order a high-quality skate shoe with a classic look, you will find what you are looking for in the Busenitz range from adidas Skateboarding. Because if Dennis himself has been on the board with his shoes for over 15 years, then adidas and he will certainly have done something right.

It sounds a bit like a cliché when a major German sports brand reaches in the direction of skateboarding and has a skater with roots in Germany sign on as the first pro of the newly founded team. But nevertheless it is part of the story.

Dennis Busenitz was born in the USA but spent the first 15 years of his life in Germany. Here he laid the foundation for his later career in skateboarding. For personal reasons, the family moved back to Newton, Kansas, where Dennis developed his signature style in the years that followed. Since 2006 he exclusively skates in adidas shoes, preferably in his pro model, the adidas Busenitz. 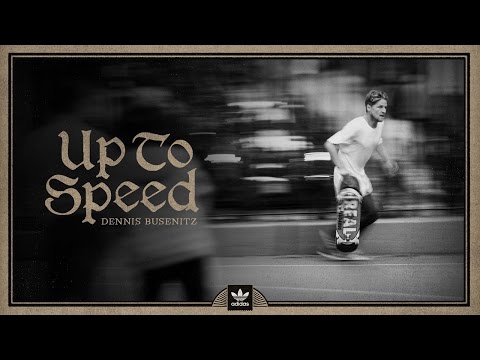