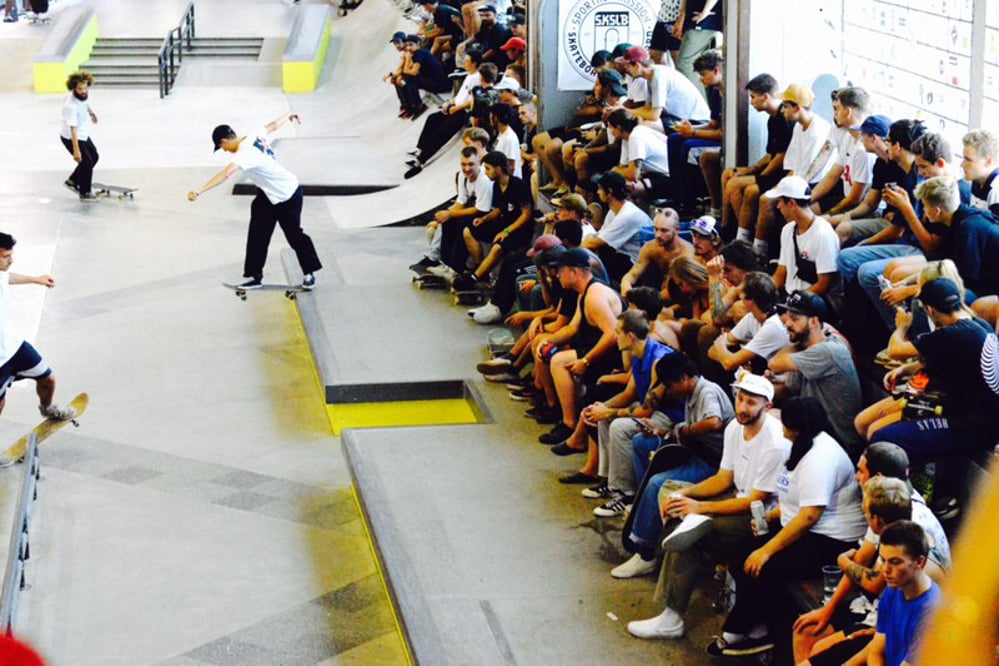 It’s on! This year’s legendary and infamous CPHOPEN-contest will not take place in Copenhagen but in Berlin. This means four days of skateboarding and pure fun directly in the German capital. We are around with the skatedeluxe team and photographer Florian “Burny” Hopfensperger and will keep you up to date.

Find all daily highlights and hardfacts* as well as the program for CPH-BER 2018 here. Make sure to follow us on Instragram and check out CPH-BER Story Highlight to always get all info, pics & clips.
* all seen through our love glasses

Besides arriving in Berlin and a fun session at the Bänke Thursday was all about the AM Qualifiers.

The skatedeluxe team riders and Berlin locals Sascha Scharf and Tim Janke where also participating to get one of the AM spots. In the Jorge Simeões from Portugal, Columbian Jhancarlos Gonzalez and Tobias Bisse Christoffersen won the three spots for CPH-BER.

Denny Pham was already qualified and went to a session at his home spot with Ryan Decenzo, Paul Hart and a bunch of other guys. After that we called it a day having some cold drinks at the Beergarden. See more at the video from Flatspot Mag.

Friday was all about the Civilist x Levi’s Supermarket Session, which started with a rail session.

We saw a lot of bangers going down at this really packed place. In the end, Zion Wright was announced as the deserved winner of the session. Ishod Wair placed 2nd. Judges did not only count the best trick but rather who did most best tricks.

After the session, the whole squad – at least those that could fit in – went inside the supermarket. The indoor parcours featured a huge CPHOPEN love glass combined with a jumpramp as the main obstacle and all the guys went crazy on it.

Want to see more? Check out the video by our friends in Flatspot Magazine!

Not everybody seemed to be 100% fresh after the Civilist x Levi’s Party from Friday when the first sesh of the final CPHBER day kicked off at Böcklerpark. Anyway, we still saw some amazing skateboarding going down at the banks & curbs as well as on the rail and stair set nearby. Jorge Simoes who also won the AM contest on Friday came in first in front of Vincent Milou, Alex Mizurov and Trent McClung.

After the whole squad went to the Skatehalle Berlin for the finale qualifiers. Guess the Nike SB shelter wasn’t ever packed like this before. Aurelien Giraud, Ishod Wair and Jorge Simoes took the first 3 places.

The surprise finals went down at Berlin’s Dog Shit Spot. We saw some rad stuff going down here – i.e. Zion Wright with a 540 – as well as the typical CPHOPEN atmosphere: Free beers flying through the air, lots of love glasses and a happy crowd. In the end, Zion outperformed all other finalists and won this year’s CPHOPEN in Berlin. Find the complete final results as well as more impressions below!

Thanks and big up to the CPH guys, Nike SB and everyone else involved for making one of the most fun and ripping annual skateboarding events happen. See you next year!