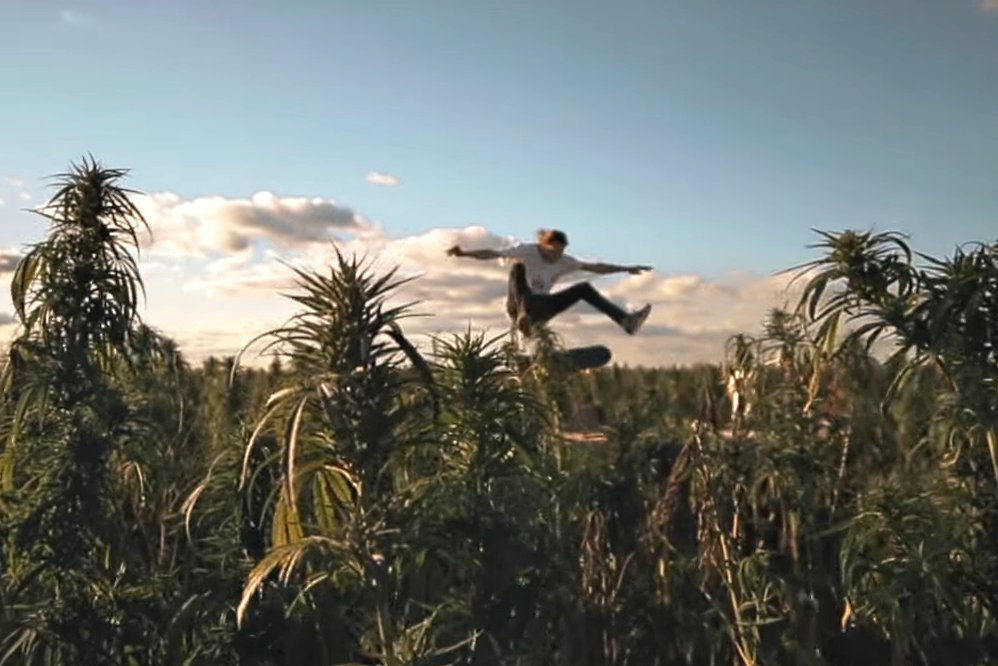 Today is the 20th of April, also known as 420. For lots of guys and girls, this date is a special day to celebrate one of the greatest gifts, nature gave to mankind. Okay just kidding…on the occasion of this day, we’d like to take a look at the special relationship of skateboarding and weed and also make some recommendations of clips!

To get rid of one of the biggest stereotypes at the very beginning: No, not all skateboarders are stoners! No, smoking weed won’t make you a better skateboarder! Nonetheless, there seems to be some kind of connection between skateboarding and pot.

The urban legend says that there were some high school students in the 70s who always met 4:20 at a special place to get high. If you see 4/20 as a date in American Englisch it’s simply the 20th of April. We never gonna find out if this is the real story, but for now, it’s common sense.

When looking at the skateboarding industry you’d almost think, “Weed Sells”. Just think about HUF’s Plantlife Socks, loads of decks with more or fewer hints towards dope, pot, ganja or however you want to call it, as well as the never stopping hype about rasta colorways. And of course there also lots of pros directly exhibiting and celebrating their consumption in interviews, parts and in the world of social media. However – even if some will get mad at this point – when looking at skateboarding as a sport, it seems to be one of the most tolerant disciplines out there. While there seems to be a new affair connected to “illegal substances” in mass sports every few weeks, the whole issue is far more relaxed in skateboarding.

We can all be blessed by this fact! Just think about some great guys wouldn’t be allowed to take part in contests or the participants of Street League would have to go for a urine sample after their run. It would be very interesting to see how the starting fields of the biggest contests on this planet would look like if pot was banned in skateboarding. While thinking about that another juicy issue pops up. Have you ever thought about how the Olympic Games will handle this topic? Would all the guys stop getting stoned from time to time or will they just give a fuck about it, like Mike Sinclair thinks: “It’s just the rider’s choice, and most riders that I personally know would rather smoke weed than go to the Olympics.”?

Getting High With Antwuan Dixon

But to return to the current topic: What is the thing with skateboarders and weed? While some psychoanalysts would state it could be the rebellious attitude of skateboarding with ignoring social conventions that enhances the affinity towards pot, others may say the effects of weed have a direct impact on skateboarding. THC could reduce fear, increase self-esteem und lower pain sensitivity. And it seems like some skaters can better focus on the upcoming line or drug while being stoned.

So if you never experienced being stoned or being stoned while skating, we don’t want to tempt you. There loads of people who simply can’t handle it, who are wasting away and don’t get things done because of their consumption. These negative side effects have already ruined some lives and promising careers. Not to mention those heavy slams of totally wasted guys. Guess it’s not funny to land with your face right in the flat while trying to drop in…but hey: “Live and let live.” Some may enjoy getting wasted on beer and booze, some like to roll a blunt, some might be enjoying both and others don’t need anything. As long as your happy and like what you do it’s all good!

Be that as it may, I like to keep it objectively and unbiased and want to show you some legendary and great parts by both stoners and sobers. What side you choose is totally up to you! And to give you a little disclaimer: The selection of clips is totally subjective and does not claim to be complete. If you think some parts and skaters are missing just post it in the comment section at the end of the article. And for now: Enjoy the clips – whether you’re stoned or sober and enjoy 420!

• P.S. #1: This goes out especially to the younger guys: Take your time and don’t hurry up to try it. There’s simply no need to sit in a park rolling up a blunt wrap as a 14-year-old. It won’t make you any cooler or better in anything. And it’s the same like with lots of things: the dose makes the poison!
• P.S. #2: To everyone bitching around about stoners and other stuff right now: Yes, it might be illegal (in some countries) and yes it might be bad for you. Keep calm and deal with it, it’s 2017 and not 1955…

It’s all about skateboarding