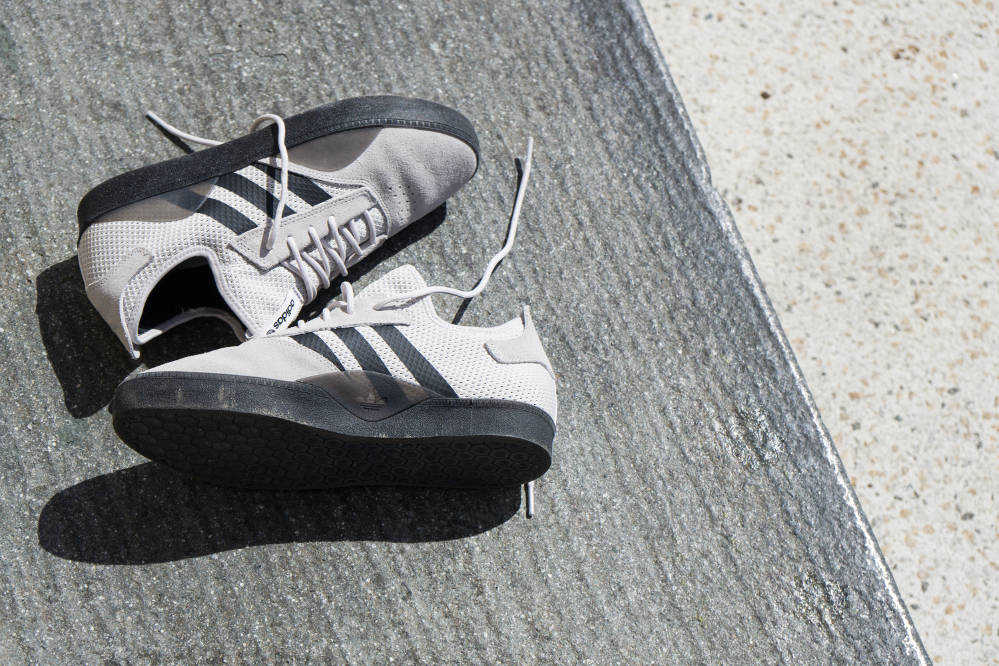 With the adidas 3ST models, the brand with the three stripes has developed two completely new skate shoes that really stand out. To give you a first impression, we tested the adidas 3ST.001.

If you’re a die-hard skate nerd, you’ve probably seen the 3ST in the past few months on the feet of pros like Gustav Tønnesen, Miles Silvas, Na-kel Smith or Diego Najera.

Whether with lacing (3ST.001) or as slip-on (3ST.002), the 3ST has arrived just in time for the beginning of spring to shake up the skate shoe market. To take a closer look at the new inventions from adidas Skateboarding, I skated the shoe for approximately 15 hours.

A fresh restart | The 3ST.001 from adidas Skateboarding

It’s no coincidence that the brand with the 3 stripes’ latest release is titled 3ST – 3 Stripes. It is the first product line to emerge from adidas’ new workshop process idea. The concept behind it seeks to merge the ideas of top designers, athletes, and skaters to break traditional standards and to further develop and redefine skate shoes.

The 3ST.001 has a sporty design, but looks by no means clumsy. The two Wave Rubber caps on the outside immediately catch the eye and give the shoe a technical style.

Once again, the brand from Herzogenaurach has used their latest innovations from their in-house research and development department. Check out our wear test to find out if it’s really noticeable while skating the adidas 3ST.001 or if adidas dove too deep into the high-tech box with their new line.

Straight out of the box, the shoe leaves a very good impression. The material is as solid as you’d expect it and makes the new model a real lightweight. Like the 3ST.002, the 3ST.001 is actually a slip-on as well, but thanks to the lacing, the shoe can be tightened to your individual needs.

The modern vulc construction of the 3ST convinced me right from the start- slip in, feel good & skate. The Geoflex profile of the vulcanized outsole provides massive grip and board feel. The 3ST is also equipped with the adidas Torsion® system. This allows your feet enough freedom of movement on a natural scale, while providing extra support and stability. It’s a real treat if you already rolled an ankle or two. The breathability of the 3ST.001 is also very nice. Anyone who normally has to fight against sweaty feet should definitely give the 3ST models a chance!

After putting on the shoe for the first time, I was curious how much the 3ST.001 could withstand. I’ve always been skeptical of knit material for skate shoes, especially because of its lack of durability. The 3ST has taught me a lesson. Due to the Wave Rubber caps, the Knit material of the shoe hardly comes into contact with the grip tape when doing tricks, and ensures very good ventilation. Even after many ollies and flips, the upper of the shoe is still in good shape. The wearing comfort remains excellent even after nearly 15 hours of skating, about 100 Kickflips, and generally intense use.

The 3ST.001 is a high-end skate shoe; you’ll realize that from the very first minute. Although the 3ST.001 runs in a rather high price range, the shoe is worth every penny in my opinion. The design is certainly not everyone’s taste. However, those who give the shoe a chance will get some of the best quality that the skate shoe market has to offer right now. Especially in terms of comfort and durability, the 3ST.001 is a force to be reckoned with.

Even though the first colourway of the adidas 3ST.001 is almost sold out, don’t worry! In the coming weeks you’ll already get two new colourways. We will keep you up to date, of course. Until then, it’s also worth checking out the adidas 3ST.002.