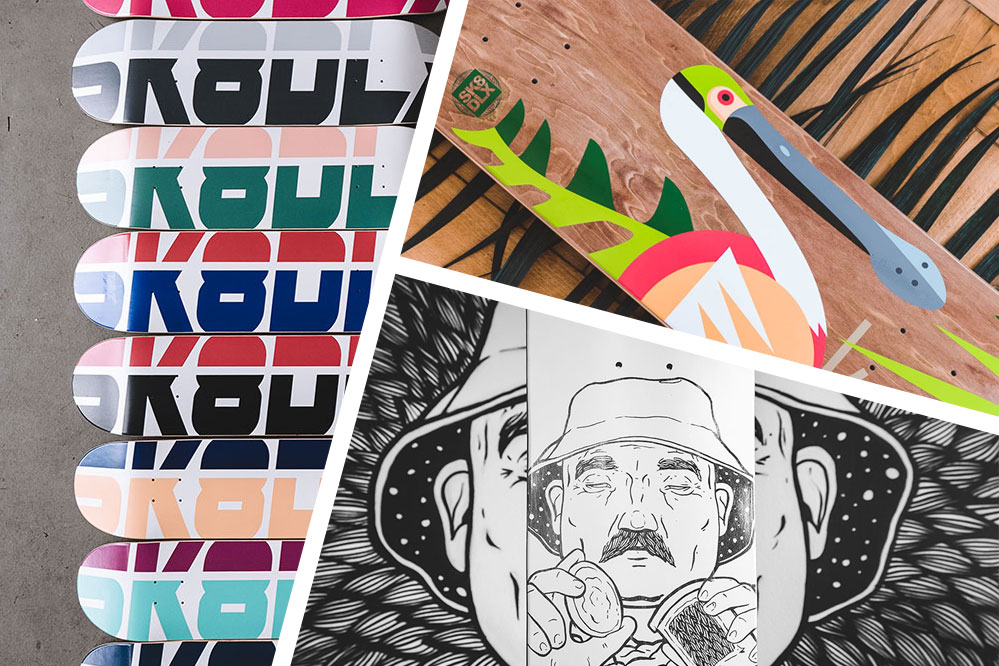 Slowly but finally, spring is knocking at the door! About time, to check your setup and get ready for the first sessions in the sunshine with a new deck. Of course, we thought of this and sent five deck series at once through the wood shop, so you can confidently turn your back on the winter and roll into the new season with a fresh piece of wood.

Die SK8DLX Tape Series – Back to the roots

HD, 4K, Atmos Surround Sound? Nowadays an everyday experience but for 90’s Kids, this would have been super Sci-fi. About 20 years ago, when the internet just started to become a thing and „surfing“ was accompanied by deafening sounds from the telephone jack you could get skate videos on VHS, and damn, they were loved.


The new SK8DLX Tape decks with widths from 7.75” to 8.25” provide you with a whole lot of nostalgia because the VHS has got the main focus here. A clear homage to the revolutionary 411 Video Magazine, the precursor of today’s online mags, makes it a perfect throwback. Therefore: skate, rewind and start again.

Get your SK8DLX Tape deck now!

This spring we’re getting historical! But no worries, you can enjoy the SK8DLX Nostalgia decks without a lame history lesson. The boards in modest white, capture true iconic moments from the past. From Tommie Smith and John Carlos, who protested for the black-power movement at the Olympic Games in 1968, to Bill Gates who is excited as a little child about the launched Windows operating system and Farrah Fawcett who presents her thatch of hair in 1976’s Charlie’s Angels on a skateboard – those beauties are lit! You’ll find the decks in widths from 8” to 8.25”, so get them before they’re gone!

Bring me to the SK8DLX Nostalgia series!

Eat or get eaten. The jungle law is no bed of roses at all. Luckily, you don’t have to get a machete and battle your way through the jungle to get the new SK8DLX Jungle Law Decks, but rather take a look at our shop.


The series is perfectly suitable for getting rid of your winter blues. The boards with widths from 7.75“ to 8.125“ are decorated with colourful birds that will twitter the sound of the jungle into your ears during your first sessions. Admittedly, those decks won’t grant tropical temperatures, but they will definitely spread some summery vibes. Perfect for the transition to the warm season!

Did winter make you a true couch potato? Lack of exercise has got a tight grip on you? Here comes your motivational boost! With the SK8DLX Athletic decks, you can make use of the good weather and accrue to athletic peak performances. The boards come in all widths from 7.5“ to 8.5“. Excuses and elusions, that your width is not available won’t count! Clear statement: Get out of your crib and on your board! Eventually, sport is the best medicine as the old greeks already said it.

The SK8DLX Athletic Decks will make you sweat!

From the sketch book to the streets: the SK8DLX x Boggie Gramb series

Attention, friends of urban art! A highlight this upcoming spring are the SK8DLX x Boggie Gramb decks. Boggie Gramb? – That’s what the artist Johannes Brückner calls himself when he goes into creativity mode. He combines skateboarding and graffiti in his work unlike any other. Further, his designs and illustrations have a remarkable recognition value and show unmatched love for details.


You don’t have to be an art lover to realise this, simply take a look at the collab and convince yourself. The decks come in widths of 7.75“, 8.0“, 8.25“ and 8.5“ and you can get them in our shop right now! But don’t panic, you won’t unleash what’s inside Pandora’s box, like the dude in the graphics.

Take a look at the SK8DLX x Boggie Gramb collab!