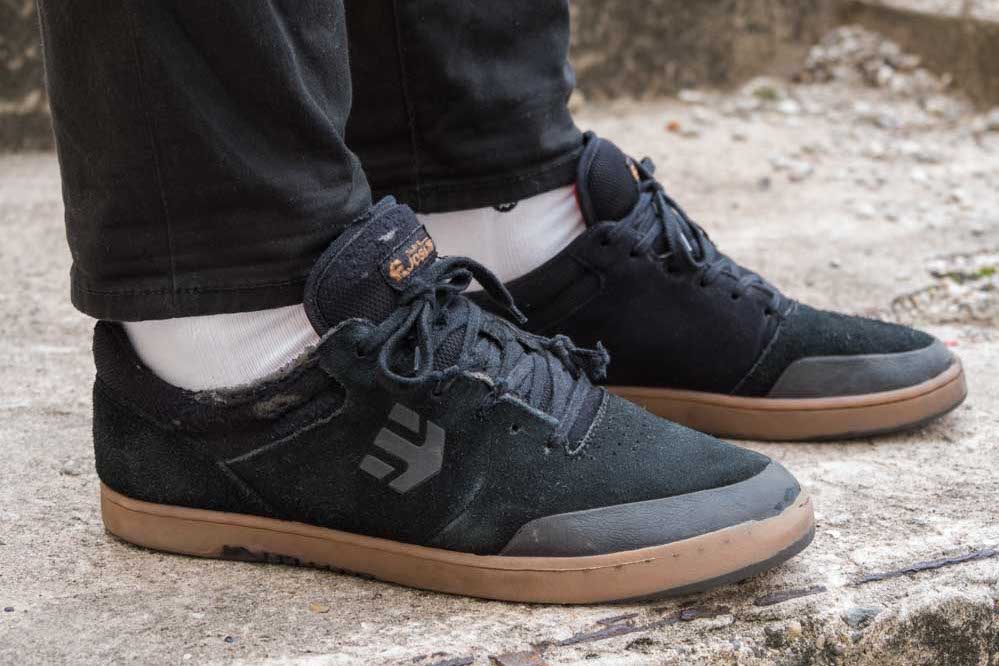 It shouldn’t be any news to you that etnies has equipped their poster child – the Marana – with a little update. To test if the outsole from Michelin really lasts up to three times longer, as advertised, I took a pair of the etnies Marana x Michelin and tested them for 20 hours.

If you’ve ever held an etnies Marana in your hand before, you know what you’re in for. For me, it was my very first Marana and directly after unboxing, I was a bit sceptical. This cupsole skate shoe looks quite bulky, which is a result of its generous padding. The tongue and the collar around the heel, in particular, are heavily padded, which makes the etnies Marana x Michelin shoe a comfort zone for your feet.

The insole made a good impression as well. The Pro Foam 1 footbed is preformed and soft, which gave me some hope that it would provide good impact support. Despite the fat look of the shoe, the Michelin Marana is pretty light, which is definitely a plus.
Another thing that attracted my attention while unboxing was the smell of the outsole. Indeed, it reminded me of the smell of car tires. But don’t worry, it’s not too pungent and it fades after a few days. However, the outsole seemed to be quite stiff.

As mentioned before, for a skate shoe, the etnies Marana x Michelin is super comfy. Particularly, the front of the shoe is quite spacious. Yep, that’s pretty subjective but I would say for narrower feet, the shoe might be a bit wide. However, this should be no issue if you lace them tight. Thanks to the padding and heel stabilizer, the Marana has a snug fit. Due to the mesh lining, you don’t have to worry about blisters. For my taste, the tongue’s padding was too thick. Therefore, I laced the shoes super tight, which flattened the tongue a bit after a while.

Of course, I skated the Michelin Maranas right out of the box. Contrary to my initial expectations during the unboxing, the sole was way more flexible and it took me about half an hour to an hour until I got fully used to the shoe. There wasn’t a single trick that felt weird in the etnies Marana x Michelin during the test.

I had nothing to complain about the shoe’s boardfeel. As said before, the Marana is a classic cupsole construction. This made me think that it could not keep up with the boardfeel of a vulcanized skate shoe. Even though I would describe myself as a vulc-sole fan, I had no problems at all skating the Marana. Speaking of grip, Michelin did their job very well! The Marana’s car tire inspired tread gives the shoe massive grip and promises a lot of fun on your board.

As I took out the insole of the etnies Marana x Michelin and inspected the shoe’s inside, I didn’t get the feeling that much had been done in terms of impact support. Nevertheless, etnies have hidden their STI Evolution Foam somewhere in the midsole and somehow, you can feel it. Together with the insole, the Michelin Marana provides you with excellent impact absorption. This shouldn’t be a surprise since the shoe was designed to support Chris Joslin’s everyday banger skateboarding. 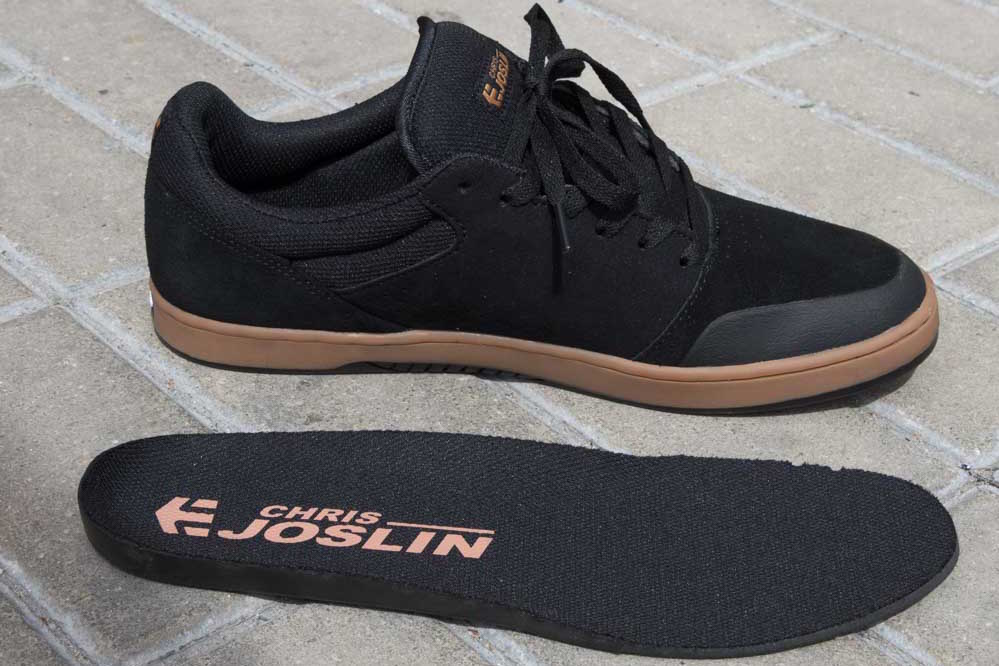 Impression after five hours of skating

Seriously, the pictures tell it all. Despite brand new Mob Grip, the shoe showed hardly any signs of wear after five hours. In fact, a shoelace ripped pretty quickly but thanks to the hidden lacing system, you can spare yourself this kind of trouble. There seemed to be only one shortcoming: as far as breathability goes, there is still a bit of room for improvement.

Impression after ten hours of skating

After five more hours, the first signs of wear became visible. But in order to recognize them, I honestly had to look for them. The wear on the tread pattern was minimal. The cupsole’s outside showed some abrasion from Kickflips and there were some, well, let’s call them scratches, on the toe cap. The stitching in the Ollie area that keeps the front and back panel together is hidden, which makes this zone super strong. As you can see in the pictures, the collar in the ankle region ripped open after ten hours. Yet, it doesn’t influence the performance of the Michelin Marana. If you wear loose pants while skating, this shouldn’t be any issue for you anyway.

Impression after 20 hours of skating

After a total of 20 hours of testing, I was still amazed. The outsole’s tread pattern showed visible signs of abrasion. However, this didn’t mean that the shoe lost its grip. Moreover, I have to admit that the Michelin Marana had to endure two fresh sheets of griptape during the test. All in all, the cupsole remained strong while flexible. The suede in the Ollie area showed some signs of wear while other high-wear areas remained intact. The heel didn’t have any blow outs or anything either.

To sum everything up, the etnies Marana x Michelin really managed to impress me. Despite the bulky construction, you’ll get a relatively light, agile skate shoe that is hard to destroy. The sole’s Michelin composition holds up to their promises and is extremely durable. Though the shoe has been designed for high impact skateboarding, you can easily pull off some curb or flat ground sessions wearing them. When etnies doubles down on some more durable shoe laces, I dare to say that the etnies Marana x Michelin has the potential to be one of the best skate shoes ever.

Test the etnies Marana x Michelin for yourself now!
Check out more Skate & Wear Tests on the skatedeluxe blog