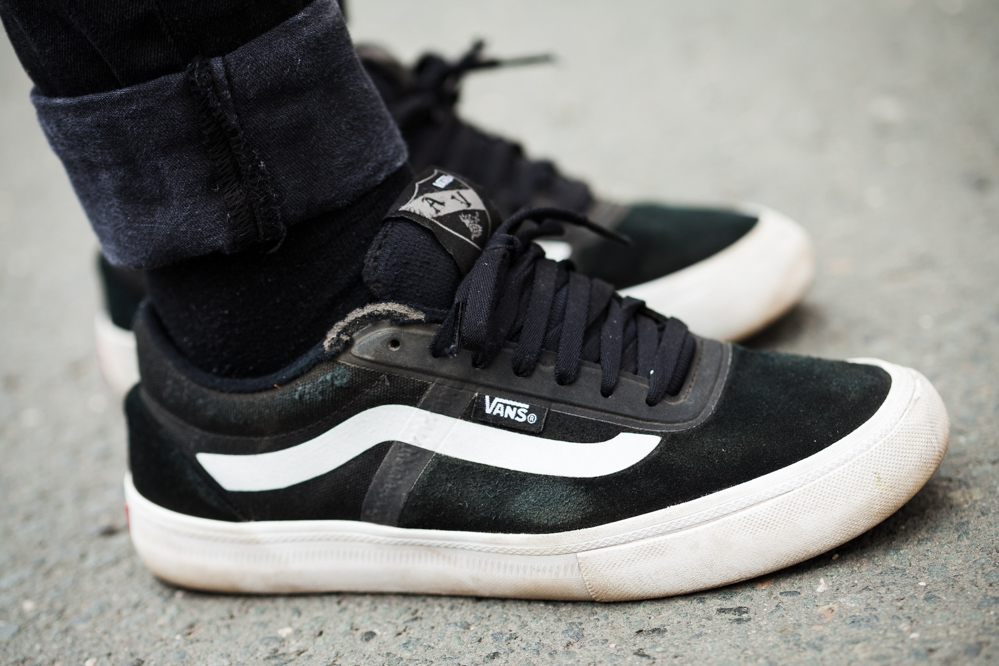 The Vans AV Rapidweld Pro Shoe – On its way to become a legend?

Yes, even old-school brands like Vans push further development of the performance skate shoe sector and with the new Vans AVE Rapidweld Pro you can see that the Californians are doing everything right. Anthony Van Engelens current pro model comes in a classic Vans Old Skool look with a handful of features for optimal performance while skateboarding.

To extend the life of the shoe, to ensure a good damping at enormous impact and a nice feeling on the board, the Vans AV provides a whole lot of skate features like a seamless Rapidweld™ outer material, taped Duracap™ reinforcement rubber underlays, a mix of suede and mesh material, Rapidweld reinforced area and shoelace area, an UltraCush HD footbed, an integrated and sock-like Luxliner material and a Pro Vulc Lite construction. All these features, may they sound futuristic or not, are designed to make the Rapidweld a high performance skate shoe that leaves no wish unfulfilled. Sounds like Vans are promising a lot!

Enough talking, let’s get to the shoe. I skated the shoes for about ten sessions in the park and on the street, and about two times in the mini ramp. I also wore the shoes out on a city trip and to a party. Additionally, I have to say that I have very small feet, so I skate the shoes in US 7, which is why they may look a bit stocky.

The first impression is the one that is crucial!

When I took the Vans Rapidweld out of the box, the noble material mix first struck my eye. The shoe instantly looked of high quality. Besides the black laces, Vans also give you white one with the cardboard.

When I slipped in the AV Rapidweld the first time, I felt my feet adjusting perfectly to the shoe. Thanks to the aforementioned sock-like structure of the Luxliner material, my feet felt secured right from the beginning. Since I have rather small feet with a slightly higher instep, some shoes are way to tight, but not this one. The first steps made me smile, because the UltraCush HD footbed made me feel like I wearing running shoes. I’m usually wearing Vans Authentics or Old Skools, but thank to its damping features, the Rapidweld felt like walking on clouds.

„The first steps made me smile, because the UltraCush HD footbed made me feel like I wearing running shoes…“

But Anthony Van Engelen aka Thrasher SOTY 2015 didn’t design the AV just for running, but also for skating. And what can I say, the first tricks felt superb. The shoe is very flexible thanks to its vulcanized sole, so you can skate him directly out of the box. OK, the slightly wider toe cap needed a little acclimation, but after the first Ollie variations and flips, the Rapidweld and I were best friends.

The last impression is the one that remains!

„Even after long sessions, the solid support of the feet in these shoes remains remarkable!”

Despite the enormous damping of the Vans shoes, I also had enough feeling for my board. Regardless of the tricks, I felt very comfortable and also despite the UltraCush footbed, I could still feel the concave of my boards. Even after long sessions, the solid support of the feet in these shoes remains remarkable! Everything sits where it should, nothing pinches, the tongue does not slip and the laces remain where they are.

Furthermore, the shoe convinces with its low weight in combination with the comfort you get. After a one-day city tour and a party afterwards, I had no aching feet, blisters or anything like that. My feet actually felt cared for. Only the ventilation, thus the breathability could be a bit better. My feet were working up a sweat and after an intensive skate session it is only well advised to let the shoes air out a bit.

„The ingenious system to make the shoes almost seamless, stands the test …”

Compared to other skate shoes, the Vans AV Rapidweld shows less wear and tear. Here I must stress that I skated the shoe with a new board, including a new and therefore very grippy griptape.

Let’s start with the upper: The material mix of suede and cordura is very robust and resistant. The ingenious system to make the shoes almost seamless, stands the test. Only after a few sessions, the laces were attacked. But a slight increase of the lace region through the additional Rapidweld protected the laces from too much contact with the griptape. Even tight fit of the shoe, the stability of the heel and the good damping remained after several sessions and a big city walking tour. Only a few spots on the tongue and the padded hem suffer from more abrasive. But again, I’m used to greater damage after a similar number of skate sessions. Also, the Vans waffle sole shows only minor wear and tear.

First, the Vans AV Rapidweld Pro shoe left a big impression on me. I liked the shoe at first sight and wanted to skate it immediately after unpacking the box. In terms of style, Vans did everything right with the Rapidweld, but that is also a matter of taste.

Even more important than the design, is the functionality and durability of your skate shoe. Again, I have to admit that the pro model by Anthony Van Engelen really convinced me. OK, € 94.99 for a skate shoe is a lot, but in my opinion the price is justified.

Vans keeps their promises and thanks to the Rapidweld ™ outer material, the Duracap ™ reinforcement rubber overlays and an UltraCush HD footbed, you get a truly robust and very comfortable shoe especially designed for skateboarding. Only the breathability could be improved. All in all, I must admit that I already put a new pair of AV shoe on my wish list. So, see for yourself and if you, for some reason, don’t like the shoe as much as I do, let me know!

The Vans Rapidweld Wear Test at London House Of Vans