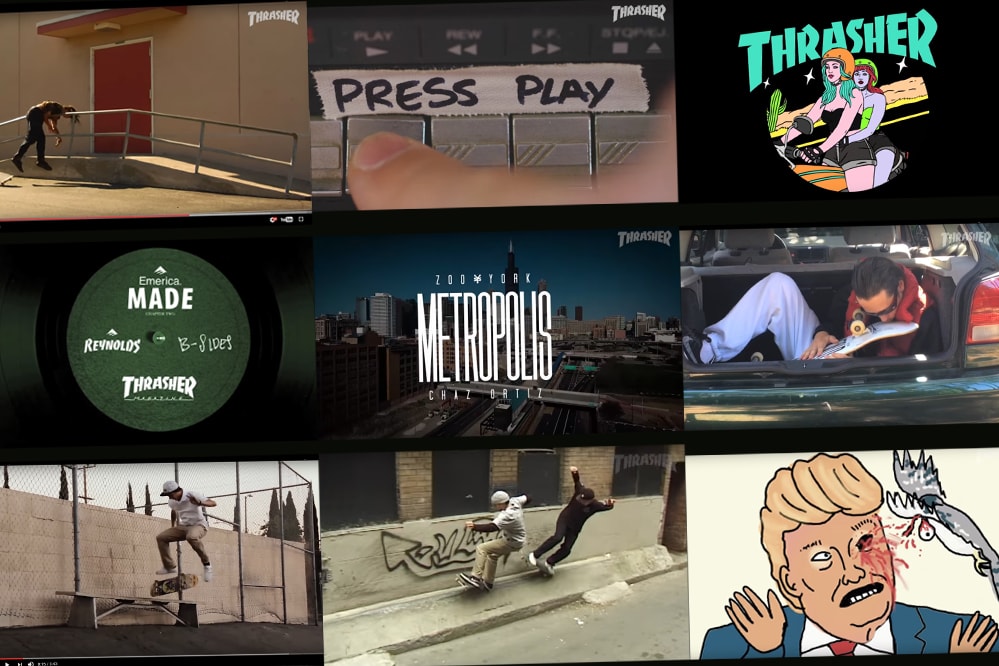 Lame end-of-the-year reviews? Not with us! The most beautiful people and best moments in 2016 took place in skateboarding anyways. So just take a seat and enjoy the this year’s top 12 parts with your homies just before the turn of the year.

Skateboarding is always nice, even if it’s only on the screen. If your skateboard does not only sit under your feet but deep in your heart, a neat edit should always push you.

Therefore it does not matter at which month a clip was released or in which zodiac the filmmaker is born. We just took 12 clips from all over the year, which send us back to the board every time we watch them.

What is there to say about Tiago Lemos? The DC Shoes Pro from Brazil is a machine and his skateboarding nearly reaches to perfection. In addition to an almost unrealistic cleanliness, Tiago also convinces through hard tricks, which, however, look as if there is nothing simpler. To redo this part is even difficult in Skate 3. Absolute High Class!

You may have noticed that Element had quite a good year. If not, simply watch the “Zygote” video, which destroys everything, that can be obtained on four wheels. At what level Skateboarding has reached today is simply amazing. Especially the part of Evan Smith has only bangers to offer. No wonder Element have become your Top Skateboard Deck Brand on skatedeluxe.

Jarne Verbruggen has not only nice hair but a truly hot style as well. Equipped with a proper board he really is in his world! His “Never Skatebored” edit is simply stunning and has, besides all fun and irony, really nasty bangers. Those who have not lived in a dark coal mine in New Zealand can’t have missed this guy. I prophesy that in 2017 it will be the same. Luckily, because whoever sees Jarne skating can only get a good mood and motivation!

It seems like Aaron “Jaws” Homoki‘s dream job as a child was the one of a chimney sweeper. That’s the only way to explain his obsession with roofs. This part almost completely consists of NBD’s, because except for Jaws nearly no one throws himself down such grim roof trails. Even if we are dealing with the second edition here, the idea has lost none of the attraction. This man is simply one of a kind. I hope his knees are insured well.

Not just our SK8DLX Sea Series is inspired by the water, also Phil Swijsen seems to be attracted by it. While most skateboarders shy away from the rain like vegans from the flesh, the Dutchman has filmed Element an entire part on streets that are soaked to the bone. So get ready for finest Powerslides and one or two bellyflops.

Just before the end of the year Chaz Ortiz released his “Metropolis” part for Zoo York, containing one of the longest BS Lipslides of the year. Anyway, the styler from Chicago has a mean repertoire which he pulls out loosely from the hip. But enough talking – just lean back and enjoy the show!

Rough and marked by the street – Anti Hero stands for rough skateboarding with a fuck off attitude. So, how does the classy Volcom team fit in? Well, after the “The Vickie Report” it’s crystal clear! These two brands are on the same level when it comes to aggressive skateboarding. These guys shred the hell out of themselves and all spots they come by. Who’s in, you ask? Daan van der Linden, Grant Taylor, Chris Pfanner and Raney Beres. You shouldn’t miss that one!

Since Emerica released the “Made Chapter 2” three years after the first one, there was no other topic at our office. This movie is easily one of the best skate videos of the year! That’s why it’s so hard to highlight just one part of the edit. Luckily, „The Boss“ himself delivers a magnificent part. No picknick table will ever be safe from Andrew Reynolds because the founder of Baker Skateboards won’t stop doing BS Flips around school yards at least for the next ten years.

The Dutch guys Phil and Jarne could have been the most popular TV duo back in the ’70s. Today, the Element pros release one sick skate video after another. Both are not only homies but also a proof for top entertainment on wheels. “Double Impact” shows that sometimes two is better than one!

Berlin, L.A., Innsbruck or Madrid – Denny Pham calls the world his home! So, it doesn’t matter where he is to pull off some neat Grind to Flip lines. Denny is one of the most consistent European skater of the last years and he’s still evolving his style. That he has what it takes to challenge American skateboarder is proven by his “Next New Wave“ edit. We are really looking forward to some new sick footage in 2017. Until then, press play and enjoy!

Evan Smith or Kyle Walker – that was the question we all had an opinion about! Sure, it could also have been The Boss, Busenitz or Figgy, but I guess everyone knew it would be either Kyle or Evan. In the end, Kwalks became SOTY 2016. But Elijah Berle definitely played an important role, too. Vans “No Other Way” is a full-blown video and a 14 minute long technical masterpiece. One of the must-see skate video of 2016!

Polar – “I Like It Here Inside My Mind, Don’t Wake Me This Time”

Polar Skate Co. founder Pontus Alv does not only knows aesthetics, he also got a lucky hand when it comes to team riders. This combination of art and style makes “I Like It Here Inside My Mind, Don’t Wake Me This Time” a perfect movie. Especially the part of Oskar Rozenberg is major!

Did we forget your favourite part? Let us know in the comments below which one got you stoked! Now it’s time to get on the board and push yourself into the New Year. Until then, we wish you a buttload of perfect skate session for 2017. Have a good one!