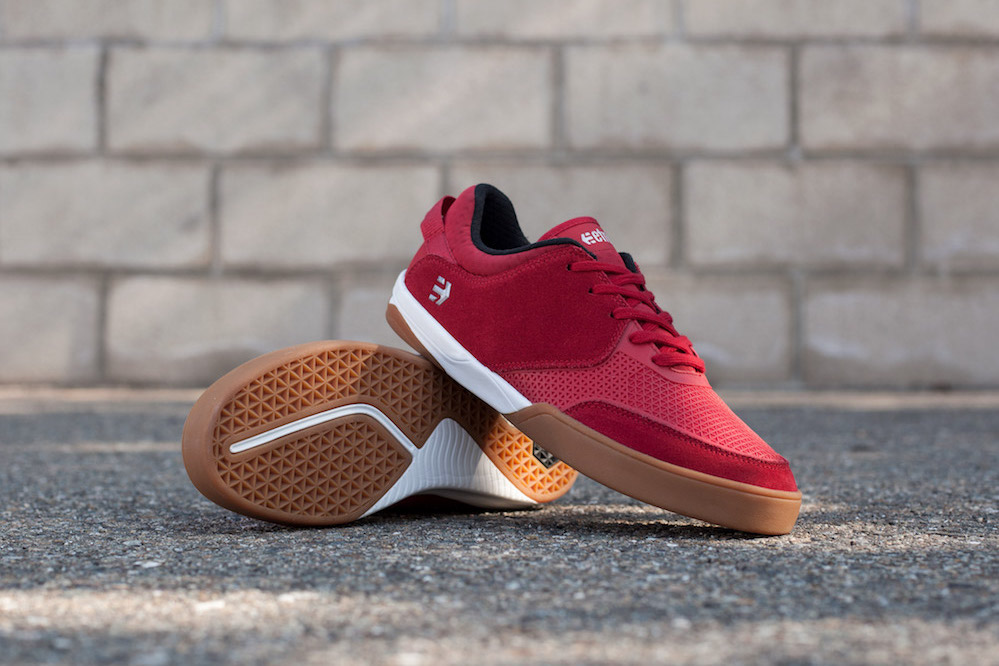 The creative minds at etnies have been eagerly refining their footwear and introduce an impressive new skate shoe to the market – the Helix. The shoe encompasses the genome of the Jameson Bloodline and the Marana Bloodline and thereby gets the best out of both popular models. Innovation – built by skateboarding!

„…we actually started developing over a year ago and had some extra wear tests because we wanted to make this part a little more durable.“

The Helix is loaded with new features, that definitely stand out against the monotony of many skate shoes. Despite being a rather technical shoe, the Helix maintains the classic silhouette of a cupsole model in a familiar etnies manner.
A highlight of the shoe is the front area, that has been lined with a flexible and breathable layer of polyurethane, that reaches all the way underneath the toecap made out of suede. This guarantees maximum durability at the high wear areas. Besides, the Helix has been provided with mesh at the tongue and collar, in order to prevent your feet from getting sweaty after long sessions.

The sole of the Helix is also a small masterpiece itself. As already done on some Marana models by etnies, a damping STI Evolution® Foam midsole has been combined with a cupsole consisting of 400 NBS rubber. Consequently, you don’t have to bother about gnarly gaps and primos.
In contrast to the Marana, the Helix’ outsole comes with the Geo-Hex tread pattern known from the Jameson Vulc models. The pattern composed of many symmetrical triangles gives you a lot of grip. For a reason, it’s the team’s favourite outsole by far. Furthermore, the outsole has some grooves to provide you with more flexibility and boardfeel. Sick!


You can now get the etnies Helix in our shop in red, grey/black and black/white/gum – the signature colorways of Trevor McClung, Silvester Eduardo and Barney Page. Those guys definitely know how to skate. Reason enough to give the Helix a try!

Check the three colorways of the Helix!