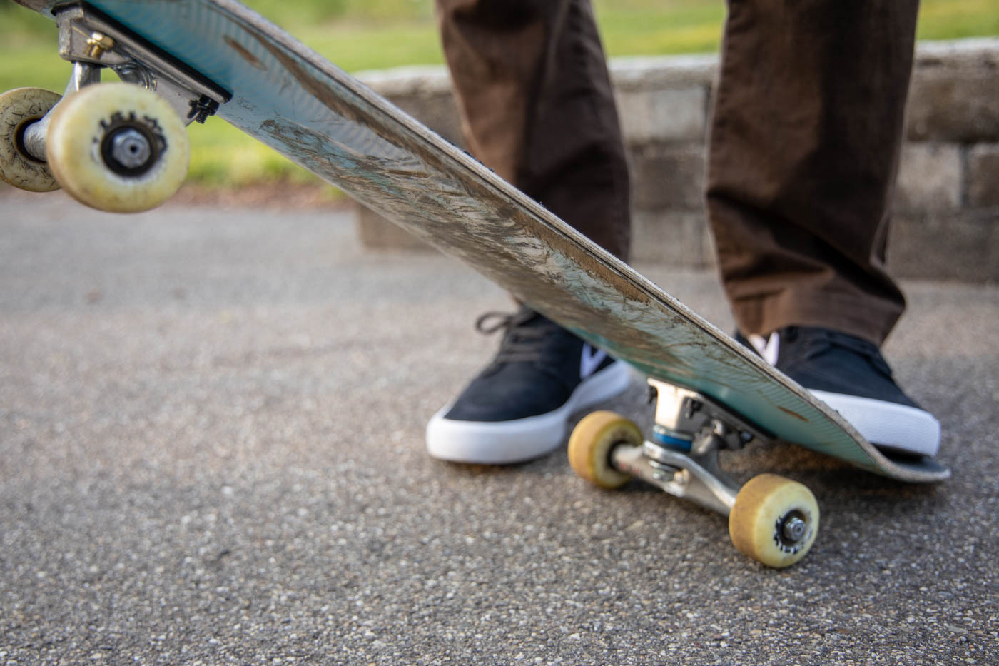 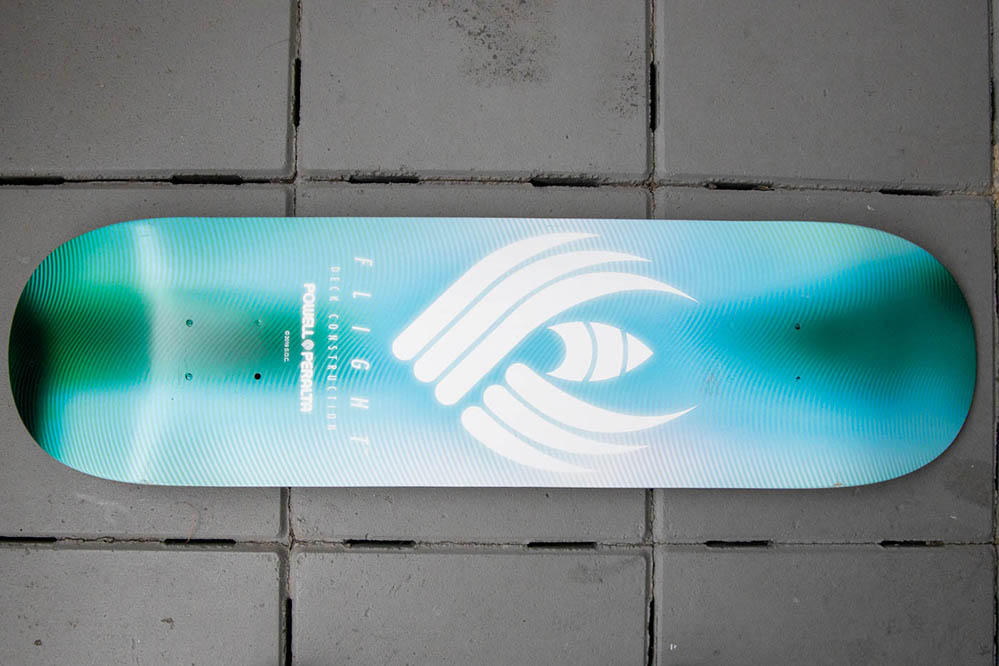 For this test I had the pleasure of skating the Powell-Peralta Flight 243 Shape 8.25” Deck, to see how it holds up and if it’s more durable than normal 7-ply decks. Before I started the test, I read a lot about the “Flight” construction and so, of course, my expectations were pretty high.

I’ve chosen the 243 shape because I’m a street & park skater and the first thing I noticed right from the get-go was how thin the deck is. Powell-Peralta claims that it is as thin as your phone. And I totally agree with that, unless you still own an old-school Nokia 3310. The concave of the deck looks really good especially if you like to skate high concaves.

At first glance, it looks like you can get some great flick with it. The top layer is made out of carbon fibers and it looks like the material is reinforced even more by the trucks. Powell-Peralta says that the deck should be stronger than a 7-ply deck. As far as the graphics are concerned, I think they could have been designed a bit better or differently. In any case, some of the other shapes have better designs, but that’s a matter of taste.

The first ten minutes of the first session felt weird. The shape is a little bit different than the regular 7-ply decks I usually skate. Both nose and tail have a pretty standard shape however around the wheels where the concave starts, the deck looks a little bit wider. Maybe this is only a feeling because of the concave.

Powell-Peralta claims that the deck has a higher rebound and snap resulting in higher Ollies. Because most of the new decks out there have good pop, I can’t really say anything about that right now. After ten minutes I already got used to the deck and the session continued for a few hours.

As I mentioned before, I really like the shape and concave of this deck. I’m a street/park skater so I usually skate a lot of rail, ledge, curb and manual pads, but from time to time I also like to skate transitions. It felt great to bring this type of deck to the streets and sometimes hit the mini ramp & bowl. If you are more into transitions you would probably go for a wider deck, but the shape & concave are still really good for all styles of skateboarding.

I especially enjoyed the concave of the deck. It has a medium concave, but it felt more in-between a normal and high concave. I’ve tried two different shoes on the deck and the flick felt great thanks to the well-formed concave.

Is it really stronger? | The Powell-Peralta Flight Tech

I skated the Powell-Peralta Flight 243 Shape 8.25” Deck for 30 hours in total. To give you a better insight on how the deck performed, I wrote down my feedback every ten hours.

After the first few sessions I’m convinced that the deck won’t break so quickly. The graphic is already pretty much worn down on the nose, tail & center of the deck. In the past, I’ve skated other decks that featured carbon fiber and after a while, they got wobbly and soft and had less pop as a result. After the first few sessions with the Powell-Peralta Flight Deck, I didn’t have any of these problems or the feeling that the deck was becoming soft.

The rebound and pop were still going strong and I was able to pop some high Ollies. After approximately 10 hours of skating, I checked the tail and got the feeling that after the next few sessions a razor tail might appear that normally results in less pop. 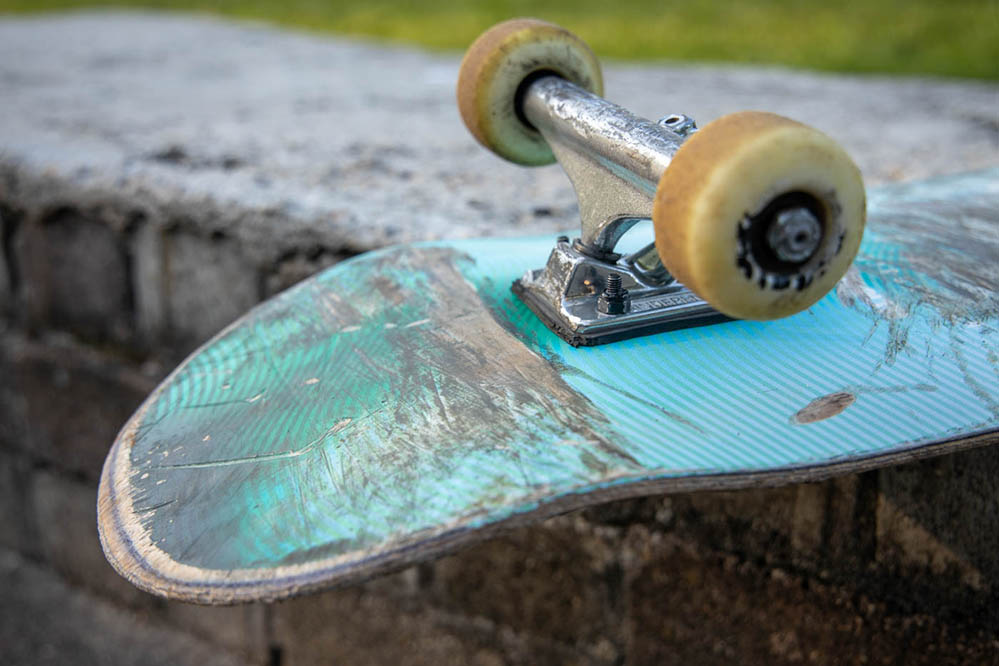 After a few more sessions the deck is still holding up pretty strong. Even though the tail is getting thinner it still doesn’t affect the pop. But because the deck is thinner in general, you’ll most likely end up with a razor-sharp tail faster than with a regular deck. Nevertheless, the pop is still really good and the shape & concave are still going strong. 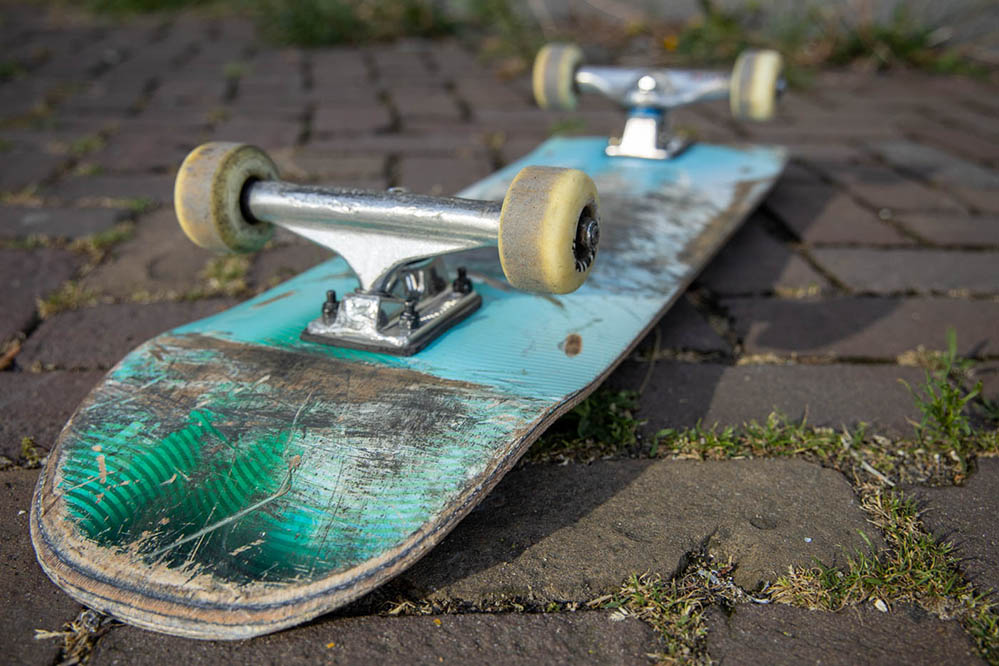 In the last few hours of the test I was trying to push the deck to its limits. I gave it some high disasters in transition and lipslides on the rail – usually tricks where the deck begins to lose its durability or finally snaps. Even if the deck is bending more, I still don’t have the feeling that it will break anytime soon. At this point, the tail has become pretty sharp, but the pop is still there. In the end, I would really say this deck is more durable than a standard 7-ply deck.

The Powell-Peralta Flight Deck is as thin as your phone and has reinforcements around the trucks. I really like the concave of this shape which is settled somewhere between a normal and high concave. It is really well formed and offers an amazing flick.

The pop is something to get use to at the beginning, but not too different than usual. At the end of the test the pop was still there and I don’t have the feeling that it’ll go away anytime soon. Something that concerned me was the very sharp tail. Because the deck is really thin, a razor-sharp tail appeared pretty quick. Even though I was pretty sure that the pop would decline at some point, that wasn’t at all the case. After skating the deck for approximately 30 hours, I can definitely recommend the Powell-Peralta Flight Deck. Although, it is more expensive than the regular 7-ply decks, I really think it is more durable and lasts longer than any other skateboard deck.