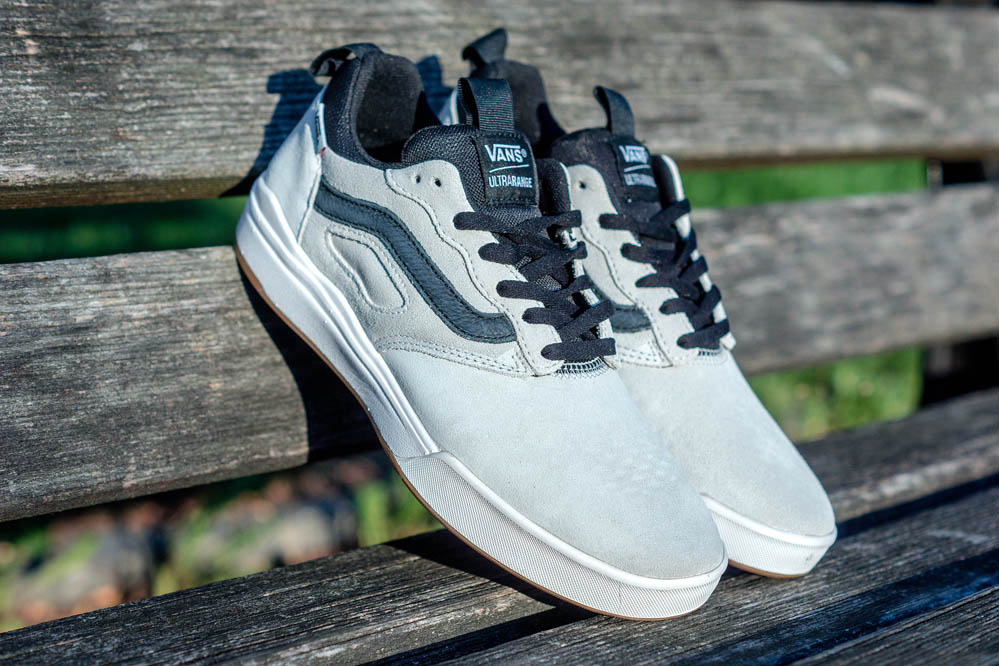 The brand-new Vans UltraRange Pro arouses some expectations due to its name. I skated the low-top all-rounder for 20 hours to test if this skate shoe can really live up to all of the marketing and if it delivers the promised range of features.

Right after unboxing, I noticed that the shoe weighed close to nothing. The Vans UltraRange Pro really is feather-light. Something you wouldn‘t expect at first glance. Also, the workmanship impresses with its high quality: every seam was in perfect condition and the materials make a good impression. Additionally, the Vans UltraRange Pro is very flexible. Even the laces that came with it are made of an elastic material that supports the movement of your feet.

Despite the minimal weight, the shoe is equipped with decent padding and a solid toe cap, the Vans Duracap. The Luxliner sock liner is a useful feature as well and , in particular, the Waffle outsole with a hexagon profile feels very stabil. The only shortfall I could find is that the UltraCush Lite insole can’t be removed. If you want to use your own insoles, you’ll have to use some force.

The positive first impression about the low weight that I had while unboxing held true for me while wearing the shoe as well. The Vans UltraRange Pro skate shoe is simply ultra-light. Combined with the nice and flexible material of the shoe that really snuggles around your feet, you might think you’re wearing an after-skate shoe. Thanks to the Luxliner, the Vans UltraRange Pro really sits pleasantly tight around the feet, even without tight lacing.

It’s no secret that the first tricks feel a bit strange when you have brand-new shoes on your feet. With the Vans UltraRange Pro, the first sessions felt surprisingly good and I had hardly any problems with my new companions. Maybe this was also an effect of the low weight, which makes you sometimes forget that you’re even wearing shoes at all. The flexibility of the shoe helps in terms of performance as well, because it really supports every movement of your feet. Right from the beginning, it was obvious that the Vans UltraRange Pro is a very versatile all-round skate shoe thanks to its low weight, the solid material, its comfort, and the supportive cushioning.

The Vans Waffle profile is a true classic and knows how to impress. But, the outsole of the Vans UltraRange Pro is what really steps up the game and gives you massive grip on your board and on other surfaces as well. In combination with a new layer of griptape, it almost feels like you’re glued to your board.

The boardfeel rises to the occasion here, too. At no time did I miss the feedback of the board. Same goes for the flick, which was very solid, although I don’t have the biggest repertoire of flips, to be honest. With gaps and grinds, in particular, I always had good control over my board and I liked the feedback. If you’re into doing a lot of flips, you’ll probably have to get used to the massive grip at the beginning.

Because the Vans UltraRange Pro is so light and flexible, I had my doubts if this shoe could convince me when it came to impact protection and dampening. But I was surprised how well the combination of the Waffle outsole, the UltraCush Lite footbed and the UltraCush Lite midsole works. The shoe protects you well and small to mid-sized gaps and stair sets are no problem at all.

Here, the all-round aspect of the Vans UltraRange is perfectly executed. If you skate different terrains with a wide repertoire of curb tricks, gaps, and transitions, you’ll definitely be happy with this new Vans model. If you’re fully into technical skateboarding or always looking for the next massive gap, you should probably find a more specialized skate shoe. For me, the Vans UltraRange Pro became the perfect companion as an all day, every day skate shoe.

After the first five hours, I could barely see any difference when it came to signs of wear. Besides slight signs of movement on the midsole, the shoe kept its shape and only a subtle amount of the grey suede upper from the Ollie area made it onto the griptape.

After ten hours and several sessions, the Vans UltraRange Pro showed its first signs of wear. The Ollie area, especially, had slight abrasions that indicated the beginning of a possible hole in the upper. The midsole also couldn’t hide the evidence of wear and showed some further evidence of wear and tear. The same goes for the impact protection as well, which was still good, but became less protective & supportive. All in all, the shoe got a bit softer but the outsole was completely unscathed and the massive grip remained unchanged.

While the rest of the shoe showed no noticeable differences, the Ollie area finally cracked and the upper developed a small hole. But thanks to the second DuraCap layer beneath the first upper, my socks remained intact. It would surely take a while to get through that.

Twenty hours and a swollen foot later, the Vans UltraRange Pro showed some wear but certainly wasn’t defeated. Although the hole on the Ollie area got bigger, the DuraCap remained intact; even after a second layer of fresh griptape. The outsole barely lost any of its profile and still remains solid and grippy.

Overall, the performance of the Vans UltraRange Pro skate shoe has barely ceased to amaze me after the test. The shoe only became a bit wider over time, which is quite common with suede skate shoes. Additionally, the impact protection lost a bit of its strength. All in all, this shoe still is a great companion even after 20 hours of use and I will continue to skate it; at least, until I finally wear through the DuraCap.

Note: Like I mentioned before, I am not into flip tricks that much. My skateboarding is characterised by a lot of Ollies, small gaps, a lot of grinds and shove-its. That said, your wear profile might be slightly different if you normally do 100 Kickflips during a regular session.

Check out all Vans UltraRange models in our shop!
More skate & wear tests on our blog